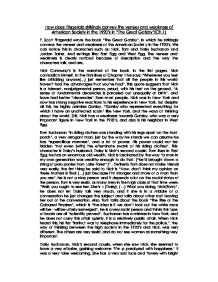 How does Fitzgerald strikingly convey the veneer and weakness of American Society in the 1920(TM)s in The Great Gatsby(Ch.1)

How does Fitzgerald strikingly convey the veneer and weakness of American Society in the 1920's in "The Great Gatsby"(Ch.1) F. Scott Fitzgerald wrote the book "The Great Gatsby", in which he strikingly conveys the veneer and weakness of the American Society in the 1920's. We can notice this in characters such as; Nick, Tom and Daisy Buchanan and Jordan Baker. And settings like; East Egg and West Egg. The veneer and weakness is clearly noticed because of description and the way the characters talk, and are. Nick Carraway's is the narrated of the book. In the first pages, Nick contradicts himself. In the firsts lines of Chapter 1 he says: "Whenever you feel like criticizing anyone(...) just remember that all the people in this world haven't had the advantages that you've had". This quote suggests that Nick is a tolerant, nonjudgmental person, proud, with his feet on the ground. "A sense of fundamental decencies is parceled out unequally at birth", and have had better "decencies" than most people. ...read more.

What you doing, Nick(Tom)", he does not let Daisy talk very much, and if she is in a middle of a conversation he just changes the subject and talks about other stuff leaving her out of the conversation. Also, Tom talks about the book "The Rise of the Coloured Empires", which is "the idea is if we don't look out the white race will be - will be utterly sumerged", he is a very racist person and thinks this type of books are all "scientific proved". Buchanan has a mistress in New York, and he does not carry this affair quietly, it is a relatively public affair. When Nick heard this, his first "instinct was to telephone immediately for the police.", the way of thinking between the high society in the 1920's and Nick, was very different. The others are very sexist, and do not see women as something very important. Daisy Buchanan, Nick's second cousin, when she saw Nick, she seemed to have a very effusive, gushing welcome "I'm p-paralyzed with happiness." ...read more.

West Egg is where the "nouveau riches" live, where Nick and Gatsby live. Gatsby has a "colossal" mansion, an "imitation of some Hotel de Ville in Normandy(..)(with) a marble swimming pool". People in this side of the city represent: ostentation, garishness and the flashy manners of the new rich. East Egg, is where people with old wealth live. This side represents: aristocracy, breeding, taste, and leisure. Even though, East Egg and West Egg have both homes to fabulous wealth, and are separated by very little, they are opposite in values. In conclusion, Fitzgerald uses; the power, sexism of Tom, the way he acts; the importance and admirance for Gatsby from Nick; the fear of Daisy of being herself, acting like she really is and; the way people act in the East and West Egg, to convey the weakness. And he uses, the Buchanan's marriage; Jordan's surface glamour is used to cover her emptiness; and the way Daisy acts, the falseness of society, to pose the veneer. In overall, he uses characters, and places to convey the veneer and weakness of the American Society in the 1920's in the fist chapter of "The Great Gatsby". ...read more.