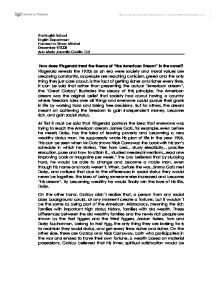 The English School English Department Handed to: Simon Mitchel December 9/2008 Ana Mar�a Jaramillo Castillo 10.3 How does Fitzgerald treat the theme of "the American Dream" in the novel? Fitzgerald reveals the 1920s as an era were society and moral values are decaying constantly, as people are reaching cynicism, greed and the only thing they just care about, is the fact of getting richer and richer every time. It can be said that rather than presenting the actual "American dream", the 'Great Gatsby' illustrates the decay of this principle. The American dream was the original belief that society had about having a country where freedom rules over all things and everyone could pursue their goals in life by working hard and taking free decisions. But for others, the dream meant on achieving the freedom to gain independent money, become rich, and gain social status. At first it must be said that Fitzgerald portrays the idea that everyone was trying to reach the American dream. James Gatz, for example, even before he meets Daisy, has the idea of leaving poverty and becoming a very wealthy status man. ...read more.

"It makes me sad because I've never seen such beautiful shits before." He did whatever he could to become rich, so he could gave her all the comfort and things she actually 'deserved', even by leading with illegal business of alcohol, which at the time was prohibited. Gatsby's idea of fitting in society is shown by throwing expensive and sophisticated parties. This is a clear example of the corruption that has become the idea of the American Dream and the carelessness of the time. Gatsby's parties were perfect for people, mostly not even invited, to party until early hours in the morning, but without caring to meet the guest or knowing who he was. The only thing they cared for was the important relations they would make or being part of a newspaper article. As Carraway states, "in his blue garden people came and went like moths among the whisperings and champagne." The only thing is, that Gatsby doesn�t understand that he will never, despite all the 'dazzling parties' he can pay, the beautiful, enormous mansion he has, gain Daisy's heart, as he'll never inherit the traditions of high class society. ...read more.

The problem was, Gatsby kept living on the past, on the idea that Daisy used to love him, never realizing that there were more important things for her than actually leave everything and begin a relationship with him. As his dream collapses, the only thing left for him is to die. It can be said that rather that he actually being dead at the end, his death is more a symbolism of his dream being dead. Likewise, Tom ends up without Myrtle, leaving his house with his wife, the one who had an affair with another man, and carrying the burden of guilt for, in a certain way three different people, Gatsby, Myrtle and Wilson. Overall, it can be said that 'The Great Gatsby' is a clear example of the corruption of society, the fall and consequences of the so called 'American Dream' in the 1920s. It shows the way people will fall for money, and that they'll try to reach whatever they wanted for by any means. The fact that greed and power ruler over human values and managed to be the factor that leads a person's life. ...read more.