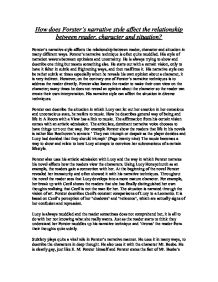 How does Forster(TM)s narrative style affect the relationship between reader, character and situation?

For example, her break up with Cecil shows the readers that she has finally distinguished her own thoughts realising that Cecil is not the man for her. The situation is narrated through the vision of art. Forster describes Cecil's constant comparisons of Lucy to a Leonardo. It is based on Cecil's perception of her "shadows" and "reticence", which are actually signs of her confusion and repression. Lucy is always muddled and the reader sometimes does not comprehend her, it is all to do with her not knowing what she really wants. Just as the reader starts to think they understand her Forster muddles up his narrative technique and 'throws' the reader from their thoughts quite subtly. Subtlety plays quite a vital role in Forster's narrative manner. He uses it in many ways, to describe the characters in deep thought. He also uses it with the character Mr. Beebe. He is clearly gay, just like E. M. Forster himself and Forster states the fact of Mr. Beebe's sexuality however in an extremely clever and subtle way without making the whole situation too obvious. ...read more.

For instance, Ms. Bartlett and Cecil are described as more conservative characters more indoor kind of people and are generally narrated doing things less active. A vast majority of the time they are only narrated doing things inside. However, comparing them to Freddy, Lucy and George it shows extreme distinction between characters because they are more outdoor and active characters, often narrated doing thing outside which then goes on to show the link to the view and how they appreciate it a lot more than Cecil and Charlotte. For example, Cecil refuses to play tennis stating that he was not made to play sport. Overall, Forster's narrative style affects the relationship between the Readers by subtly favouring the character, by showing criticism towards the character or not criticising them at all and leaving the opinion to be made by the reader. His narrative style affects the situation by linking it to something that the reader can refer to, in this case, art and music. This therefore leads to a much more vivid image of the situation that the reader creates in his of her mind. ...read more.