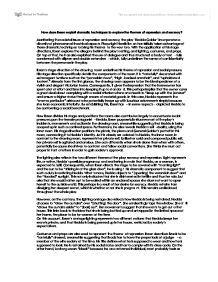 How does Ibsen exploit dramatic techniques to explore the themes of repression and secrecy?

How does Ibsen exploit dramatic techniques to explore the themes of repression and secrecy? Manifesting the societal issues of repression and secrecy, the play 'Hedda Gabler' incorporates a diversity of phenomenal theatrical aspects. Playwright Henrik Ibsen has skilfully taken advantage of these dramatic techniques to bring his themes to the very fore. With the application of his stage directions, Ibsen explores the allegory behind the play's setting, and lighting, costumes, and props. On top of that, he has also exploited the use of dialogue and thus structured a body of text - fully condensed with ellipses and double entendres - which, fully underlines the sense of confidentiality between the personae in the play. Ibsen's stage direction of the drawing room underlines his theme of repression and social pressure. His stage direction specifically details the components of the room. It is "tastefully" decorated with extravagant furniture such as the "porcelain stove", "high-backed armchair", and "upholstered footrest." Already from the first glance, the drawing room appears to be the ideal specimen of a stylish and elegant Victorian home. Consequently, it gives the impression that the homeowner has spent a lot of effort and time into keeping it up to standard. This perhaps implies that the owner cares a great deal about complying with a social criterion where one needs to "keep up with the Joneses" and ensure a higher status through means of material goods. ...read more.

His title defines what he is supposed to wear and how he is supposed to look. He is restrained by his social status and has to comply with its dress code. On the other hand, Lovborg wears "black" because he, as a reformed individual, most probably feels as though he should dress appropriately so that society would not form negative judgments against him. He is being suppressed by society's expectation. On top of this, Ibsen also uses certain props such as General Gabler's pistols or flowers to highlight the social pressure. The pistols are a reminder of Hedda's upbringing and rank, which dominate and influence her actions. The fact that she has been raised and educated by a high-class society makes it obligatory to speak in a polite manner, to "offer her hand" to acquaintances, to wear "tasteful" and exquisite "gowns". Meanwhile, the flowers symbolize Hedda's feminine responsibilities, which curtail her personal freedom and limit her social opportunities. Not only has he taken advantage of stage directions, Ibsen has also formulated powerful dialogue between the characters to play up the conceptions of secrecy and repression in his play. For instance, he has incorporated a fair amount of ellipses in the conversations between Hedda and Brack, meanwhile referring to their unspoken thoughts and feelings. ...read more.

are constantly plotting against one another, yet they have to keep these schemes subtle because they cannot risk breaking standards, or rather - the customary code of courtesy of their time. Ibsen's themes reflect the intensity of the occurrences of the play. The core of "Hedda Gabler" is a blur of severe duplicity, and fraud, while at the same time - oppression, and conformity. The personae, especially our heroine - Hedda, simultaneously get sucked into a chaotic whirlwind where they persistently pull each other's leg but are pressured to do so secretly due to social restrictions. Ibsen vividly illustrates an explicit conflict between defying customs of conduct (cheating, and deceiving) and conforming to customs of conduct (doing so in complete secret). For this reason, the theme of repression can be regarded as a backdrop of social circumstances for this 'core' of events: Ibsen portrays the repressive society to be a structure of conventions that the characters constantly have to both conform and defy. Shaping the play's analogy in this fashion allows Ibsen to epitomize the complexity of humanity, and the intricacy of society. Meanwhile it also allows him to incorporate true-to-life societal issues in his realist play: each individual is a product of their social circumstances and thus is downright a conformist, yet, underneath the pretentious fa�ade, they still continually strive to break social norms. ...read more.