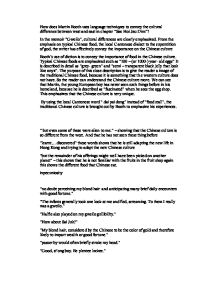 How does Martin Booth uses language techniques to convey the cultural difference between west and east in the chapter Sae Hoi Jau Dim?

How does Martin Booth uses language techniques to convey the cultural difference between west and east in chapter "Sae Hoi Jau Dim"? In the memoir "Gweilo", cultural differences are clearly emphasized. From the emphasis on typical Chinese food, the local Cantonese dialect to the superstition of god, the writer has effectively convey the importance on the Chinese culture Booth's use of diction is to convey the importance of food in the Chinese culture. Typical Chinese foods are emphasized such as "100 - (or 1000-) year- old eggs" It is described in detail as "grey- green" and "semi - transparent black jelly that look like onyx". ...read more.

This emphasizes that the Chinese culture is very unique. By using the local Cantonese word " dai pai dong" instead of "food stall", the traditional Chinese culture is brought out by Booth to emphasize his experiences. " but even some of these were alien to me." - showing that the Chinese culture is so different from the west. And that he has not seen these thing before "learnt... discovered" these words shows that he is still adapting the new life in Hong Kong and trying to adapt the new Chinese culture "but the remainder of his offerings might well have been picked on another planet" - this shows that he is not familiar with the fruits in the fruit shop again this shows the different food that Chinese eat. ...read more.

"Halfie also played on my gweilo gullibility." "How about Sai Juk?" "My blond hair, considered by the Chinese to be the color of gold and therefore likely to impart wealth or good fortune." "passer-by would often briefly stroke my head." "Good, st'ong boy. Be plentee luckee." "Unlike british butchers who carefully shaped specific cuts, Chinese butchers merely chopped the carcass up with razor-sharp cleavers." Phonetic translation Diction Plan - The three parts that Martin focuses on in helping the reader to understand the Chinese culture : * The culture of food * The Chinese superstition * the emphasizes on the Cantonese language - showing that a lot of Chinese at that time still does not know how to speak English, therefore learning Cantonese is important for Martin ...read more.