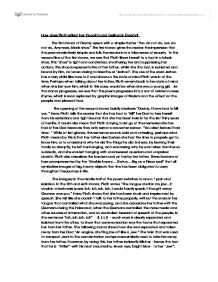 How does Plath reflect her thoughts and feelings in Daddy

How does Plath reflect her thoughts and feelings in Daddy? The first stanza of Daddy opens with a simple rhyme "You do not do, you do not do, Anymore, black shoe." The first stanza gives the reader the impression that the poem is relatively simple and lulls the reader into a false sense of security. In the second line of the first stanza, we see that Plath likens herself to a foot in a black shoe. This "shoe" is tight and constricted, smothering her and suppressing her actions. The shoe is representative of her father, whilst she the foot, is restricted and bound by him, not even daring to breathe or "Achoo". The use of the word Achoo has a very child-like tone to it and shows us the state of mind Plath was in at the time. Perhaps when talking about her father, Plath reverts back to her state of mind when she last saw him, which in this case, would be when she was a young girl. ...read more.

The imagery in the middle half of the poem switches to one of pain and isolation. In the fifth and sixth stanza, Plath states "The tongue stuck in my jaw....It stuck in a barb wire snare. Ich, ich, ich, ich, I could hardly speak, I thought every German was you." Here, Plath shows that she has been stuck and imprisoned by speech. She felt like she couldn't talk to her father properly, without the snare in her tongue that controlled what she was saying, and she associates her father with the Germans during the Holocaust, when the Germans controlled the mass media and other sources of information, and so controlled freedom of speech of the people. In the sentence "Ich, ich, ich, ich" (I, I, I, I) - each word is clearly separated and isolated from the other, to show that communication was the factor that separated her from her father. The following stanza shows how she was separated and taken away from her Dad "An engine, chuffing me off like a Jew." ...read more.

Just like her father, her husband "bit her pretty red heart into two" and broke her heart just like her father did 10 years ago. Plath then goes on to refer to her husband as a vampire, who sucked the life and feeling out of her for 7 longs years, under which she suffered much hardship under the tyranny of her husband. He hurt her like her father did- "If I've killed one man, I've killed two-" This basically shows that she equates Hughes to her father, so by killing the image of her father, and freeing her mind of him, she's essentially "killed" Hughes too. In the end, she manages to get rid of the "vampire" and so, also gets rid of the memories haunting her. As the poem approaches its end, you can see how her hate intensifies and she finally states in the last stanza "Daddy, daddy, you bastard, I'm through." By addressing her father directly, it shows the reader the intensity of the sentence, and also the complete absolution that she has won over her father, and finally reaches liberation- be it in life, or death. ...read more.