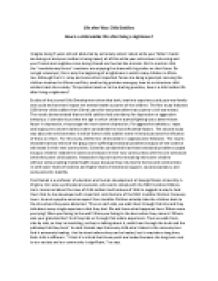 How Former Child Soldiers are Being Helped.

﻿Life after War: Child Soldiers How is a child soldier life after living a nightmare? Imagine being 7 years old and abducted by extremely violent rebels while your father?s hands are being cut and your mother is being raped; all of this while your entire town is burning and your friends and neighbours are being chased and hunted like animals. Not to mention that the ??revolutionary forces?? members are enjoying the show with big smiles on their faces. Do not get scared yet, this is only the beginning of a nightmare in which many children in Africa live. Although the U.S. army and some other important forces are doing a good job rescuing the children involved in African conflicts, another big problem emerges; how to re-introduce child soldiers back into society. ...read more.

For this study, 330 former child soldiers in Uganda were followed. The results showed that two thirds of the group were suffering emotional problems because of the violence witnessed in their new communities. Scientists considered that these emotional problems surged because children related the violence witnessed in their new communities with the one witnessed while they were child soldiers. Researchers found that the remaining third were children without serious lasting mental health issues because they returned to homes and communities in with lower levels of violence and higher levels of emotional support, social acceptance, and socioeconomic stability. Fred Bemak is a professor of education and human development at George Mason University in Virginia. He?s also a professional counselor, who works closely with the NGO Invisible Children. ...read more.

Bemak says that every child who?s taken to the recovery tour find it extremely healing. And he does believe they can be healed, but it may take a long time. Each child is different. ?I think it?s critical that these youth are healed because the long term cost to our society and our community is significant,? he says. To sum up, a child soldier life after living the nightmare of war experience is very difficult because of the mental issues that emerge as a result of this; but this problem can and must be solved. As Child Development and Professor Fred Bemak have demonstrated, it is possible if former child soldiers are re-introduced into safe communities and if they pass through well-elaborated mental healing processes like Recovery tours. William Alvarado BI1C Sources: http://www.amnesty.org/en/children http://www.child-soldiers.org/ http://www.goodtherapy.org/blog/child-soldier-psychology/ http://www.voanews.com/content/decapua-uganda-child-soldiers-21oct11-132315413/159047.html ...read more.