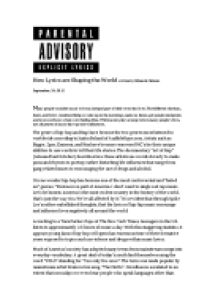 How hip-hop lyrics are shaping the world today

﻿How Lyrics are Shaping the World written by Eduardo Salazar September, 24, 2012 Many people consider music to be an integral part of their everyday lives. The different rhythms, beats, and lyrics combined help us wake up in the mornings, make us dance, get people energized, and even soothe us when were feeling blue. While music plays a large role in many people?s lives, not all genres of music have positive influences. The genre of hip-hop and Rap have become the two genres most listened to worldwide according to Justin Boland of AudibleHype.com. Artists such as Biggie, 2pac, Eminem, and Nas have become renowned MC?s for their unique abilities to use words to tell their life stories. The documentary ?Art of Rap? (released last October) describes how these artists use words cleverly to make puns and rhymes to portray rather disturbing life influences that range from gang related issues to encouraging the use of drugs and alcohol. ...read more.

A great deal of today?s youth find themselves using the word ?YOLO? standing for ?You only live once?. The term was made popular by mainstream artist Drake in his song, ?The Motto?. Its influence escalated to an extent that nowadays we even hear people who speak languages other than English using the term. The song describes an ideal life as one with a lot of sex, drugs, and money. Tyga and Lil Wayne who are featured in the song further emphasize, ?Ignorance is bliss?. It is overwhelming that so many people can misinterpret this one term ?You only live once?. While it is undeniable that our time here on earth will come to end at some point, it does not imply that we should live a careless life as described in ?The Motto?. It is apparent that when teens are faced with peer pressure situations they often give in with the ?YOLO? train of thought. ...read more.

Hip-hop further influences school performances, extracurricular activities, social background, clothing, and other elements of personal style. Rappers, for instance, are notorious for sagging their pants and as hip-hop has obtained a larger audience, rappers are now known to promote designer brands such as Gucci, Louis Vitton, Yves Saint Laurent, and others. The song ?Beamer, Benz or Bentley? is a signature example of the promotion of luxury goods. When stating, ?My pockets never empty (wealthy) and if it ain?t the Louie (Louis Vitton), then its Gucci, or its Polo (Ralph Lauren), or its Rugby?. Furthermore, people often view hip-hop listeners as irresponsible and ignorant. This proves how adolescent?s music affiliations say much about the their social affiliations. In a study conducted by the University of Pittsburgh School of Medicine in 2005 it was determined that 77 percent of rap songs had references of drugs or alcohol. The study further concluded that adolescents listening to rap are exposed to about 84 explicit references a day. ...read more.