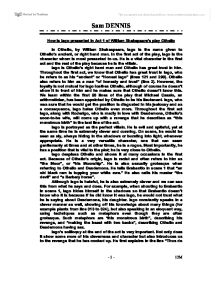 How is Iago presented in Act 1 of William Shakepeare's play Othello In Othello, by William Shakespeare, Iago is the name given to Othello's ancient, or right hand man. In the first act of the play, Iago is the character whom is most presented to us. He is a vital character in the first act and the rest of the play because he is the villain. Iago is Othello's right hand man and Othello has great trust in him. Throughout the first act, we know that Othello has great trust in Iago, who he refers to as his "ancient" or "Honest Iago" (lines 121 and 290). Othello also refers to him as a man "of honesty and trust" (line 2). ...read more.

On scene, he would be seen as sly, always hiding in the shadows or bursting into light, whenever appropriate. He is a very versatile character, one that can seem gentlemanly at times and at other times, he is a rogue. Most importantly, he has a position that is vital to the plot; he is very close to Othello. Iago despises Othello and shows it at many occasions in the first act. Because of Othello's origin, Iago is racist and often refers to him as "the Moor", or "his Moorship". He is also sexually grotesque when referring to Othello and Desdemona. He tells Brabantio in scene 1 that "an old black ram is tupping your white ewe." ...read more.

Iago's soliloquy at the end of the act is very important. Not only does it show some more of his cleverness and character but also introduces us to the revenge that he has cooked up. He first explains in the line "Thus do I ever make my fool my purse" that he has been using Roderigo for his own good; he is not really helping him at all. Then he talks his thoughts explaining what he needs to take into account when planning his cunning revenge. He talks of Othello's familiarity with his wife, his character, his own position in relation to Othello and others. Thus Iago is portrayed as the ideal villain and essential character by William Shakespeare. He is conveyed as a character that will play a vital role in the rest of the play. ?? ?? ?? ?? Sam DENNIS - 1 - 12M ...read more.