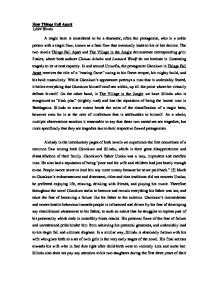 How Things Fall Apart 1,694 Words A tragic hero is considered to be a character, often the protagonist, who is a noble person with a tragic flaw, known as a fatal flaw that eventually leads to his or her demise. The two novels Things Fall Apart and The Village in the Jungle demonstrate corresponding grim finales, where both authors Chinua Achebe and Leonard Woolf do not hesitate in illustrating tragedy to its utmost capacity. In and around Umuofia, the protagonist Okonkwo in Things Fall Apart receives the title of a "roaring flame" owing to his fierce temper, his mighty build, and his bold masculinity. Whilst Okonkwo's appearance portrays a man that is undeniably feared, it belies everything that Okonkwo himself confines within, up till the point where he virtually defeats himself. On the other hand, in The Village in the Jungle we have Silindu who is recognized as "tikak pisu" (slightly mad) and has the reputation of being the laziest man in Beddagama. Silindu to some extent bends the rules of the classification of a tragic hero, however even he is at the core of misfortune that is attributable to himself. As a whole, multiple observations sanction it reasonable to say that these two narratives are tragedies, but more specifically that they are tragedies due to their respective flawed protagonists. ...read more.

However, regardless of all these tribulations and ordeals, Okonkwo was able to surmount them by his intense pride and the dignity that he had for Umuofia and its traditional tribal existence. This is what literally keeps Okwonko afloat throughout his life, at least until he finally realises that his cherished way of village life and custom is effectively gone beyond the possibility of restoration. At this point Okonkwo looses it, and his prominent flaw is unleashed: his uncontrollable anger. He eyes the District Commissioner and as he "trembles with hate, unable to utter a word" his temperamental state causes him to neglect all rationality. "And in a flash he drew his machete. The messenger crouched to avoid the blow. It was useless. Okonkwo's machete descended twice and the man's head lay beside his uniformed body." (179-180) After killing the messenger however, Okonkwo immediately knows that he would be alone in his fight. He knows that Umuofia would not go to war. He knows because they had let all of the other messengers escape. Under no circumstance however would he be a coward, thus he ironically takes his own life which in effect is the most cowardly action possible among his clan. His suicide underlines his loss of all hope and faith because for a man and warrior who knew the traditions better than anyone, it is horrifyingly shocking that he truly goes through with it. ...read more.

Okonkwo wants to "wash his hands" of the poor reputation of his father, be a respected clan leader and finally to maintain the ancient way of village life in Umuofia. Conversely Silindu simply desires to be left in peace so that he can live his life with his daughters. The ill-fated fact of the matter is however, that both of these central characters slip further and further away from achieving their aims, caused directly and occasionally also indirectly by their own faults. After Okonkwo's collapse, it would be interesting to see how he would be remembered by his clan and how the way he died would affect his remaining family. To Okonkwo his own father was a letdown and an impediment to success, ironically however, it is possible that his family would be similarly ashamed of him, his actions and his suicide. Likewise, in The Village in the Jungle we must witness the brutal ending of Punchi Menika's life, the only remaining inhabitant of Beddagama. Silindu has miserably failed; he despondently sits in a prison cell locked away from his essential environment and struggling desolate daughter. In both Things Fall Apart and The Village in the Jungle, it is evident that the faulty perceptions and actions of the two protagonists do in fact result in stimulating barriers to form between them and their life aspirations. ...read more.