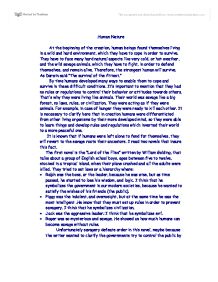 Human Nature At the beginning of the creation, human beings found themselves living in a wild and hard environment, which they have to cope in order to survive. They have to face many hard natural aspects like very cold, or hot weather, and the wild savage animals, which they have to fight, in order to defend themselves, and remain alive. Therefore, the strongest human will survive. As Darwin said:"The survival of the fittest." By time humans developed many ways to enable them to cope and survive in these difficult conditions. It's important to mention that they had no rules or regulations to control their behavior or attitudes towards others. That's why they were living like animals. ...read more.

(He placed human heads atop poles surrounding his station house.) I think that Kurtz represent the human dark side and what can happen when it envelop you completely. When Kurtz traveled to the Congo he has removed all the ties of civilization, his journey represented a trip in the human spirit. As Marlow was searching on Kurtz, he was learning more about himself, he discovered that he has more in common with the natives. I the conclusion I want to say that everyone has a dark side, but some people can conceal it more than others. A thin shell separates us from savagery. Those two novels showed us what would happen when this thin shell falls away. ?? ?? ?? ?? ...read more.