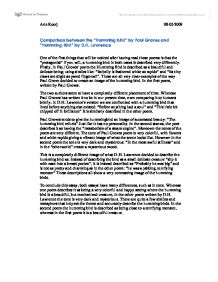 Comparison between the "Humming bird" by Paul Groves and "Humming-Bird" by D.H. Lawrence One of the first things that will be noticed after having read these poems is that the "protagonist" if you will, a humming bird in both cases is described very differently. Firstly, in Paul Groves' poem the Humming Bird is described as a beautiful and delicate being; using similes like: "Its belly is feathered white as rapids" and "Its tiny claws are slight as pared fingernail". These are all very clear examples of the way Paul Grove decided to create an image of the humming bird. ...read more.

Paul Groves tends to give the hummingbird an image of automated beauty: "The humming bird refuels" Just like it has no personality. In the second stanza, the poet describes it as having the "metabolism of a steam engine". Moreover the tones of the poem are very different. The tone of Paul Groves poem is very colorful, with flowers and white rapids giving a vibrant image of what the scene looks like. However in the second poem the tone is very dark and mysterious: "In the most awful stillness" and in the "otherworld" create a mysterious mood. ...read more.

To conclude this essay, both essays have many differences, such as in tone. Whereas one poem describes it as being a very colorful and happy setting where the humming bird is a beautiful, but mechanized creature, in the other poem written by D.H. Lawrence the tone is very dark and mysterious. There are quite a few similes and metaphors that help set the theme and accurately describe the humming birds. In the second poem the humming bird is described as being close to a terrifying monster, whereas in the first poem it is a beautiful creature. Arie Kooij 08-05-2009 ...read more.