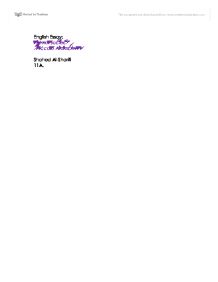 English Essay: I'm not scared Niccolo Ammaniti Shahed Al-Sharifi 11A. Topic two: "The character and morality of Michele are underestimated by the adults of Aqua Traverse." Niccolo Ammaniti's novel 'I'm not scared' is based on fear that is within the characters of Aqua Traverse. Fear can cause people to respond in an irresponsible manner and forget about morality. Throughout this novel, the adults of Aqua Traverse did not only lose their humanity but they also underestimated Michele's character and morality. It caused them to forget the love of their children and each other. This fear was caused by the feeling of poverty and not being able to leave Aqua Traverse. It has been stated many times throughout the novel, for example Teresa had pleaded to Michele: "When you grow up, you must go and never come back." This fear forced them to kidnap the 9-year old boy Phillipo. This vague idea of living a better life left the adults emotionally bankrupt. ...read more.

Pino is one of the major characters in the novel. He portrays being the villain and bringing his son in the face of evil, not realizing this is causing him to lose his innocence. At the beginning of the novel, Pino was described as a caring and loving father. He cherished every moment that he spent with the family, as he brought the children gifts and insisted on fetching the water instead of the kids. Later on, his affection was drawn out when he refused to listen to Michele's excuse as to why he was late and instead told him to 'get out'. Pino's evil character was further exposed when he blackmailed Michele into believing that he will be the blame for Phillipo's death if he visits him again, as he had stated: "If you go back, these people will kill him and it'll be your fault." This left Michele with a heavy amount of weight being put on his shoulders; it also caused him to increase his anxiety. ...read more.

However, she is very obedient towards her husband which forces her to not rebel against any evil acts. At the end of the novel Teresa becomes very emotional and stressed that she doesn't take any notice of Michele's character from within. This novel only proved that a person does not have to be wise and old in order to have true morality. Michele was a good example of this. He motivated himself with his imaginations and brought a heroic character inside of him. Despite the fact the adults never took any notice of him, it only brought him to take higher risks and chances no other child would take, such as disobeying his father's rules. He understood the adults were too busy with their own criminal minds and that he must take action to help free Phillipo and take him back to his family. Niccolo Ammaniti truly explored this novel throughout a child's mind in the face of evil. ?? ?? ?? ?? Shahed Al-Sharifi - 11A. I'm not scared - Niccolo Ammaniti. ...read more.