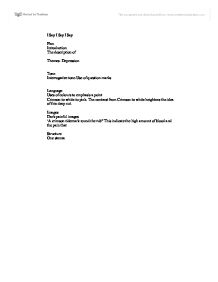 I Say I Say I say

I Say I Say I Say Plan Introduction The description of Themes- Depression Tone Interrogative tone-Use of question marks Language Uses of colours to emphasis a point Crimson to white to pink. The contrast from Crimson to white heightens the idea of this deep cut. Images Dark painful images 'A crimson tidemark round the tub" This indicate the high amount of blood and the pain that Structure One stanza The dark poem, 'I say I say I say', is surrounded by the key ideas of depression. The poem describes and questions the idea of a type of self-harm, which is cutting oneself. This Artuad style is shocking for the reader as the different linguistic techniques emphasis the depression idea within the poem. The repetition of words and themes emphasise the main points of Armitage's ideas. The poet uses a lot of repetition throughout the poem to emphasises his ideas and make them stand out. This helps the reader to understand the speaker more fluidly. The title of the poem 'I Say I Say I Say' shows a repetition of speech or some ordering tone. ...read more.

The inner rhyme of 'laugh' and 'bath' is shocking after reading the poem as 'bath' is used to describe the amount of blood, as there is a 'tidemark around the tub'. This increases the reader's awareness of this ironic tone, as people would not laugh if a bath had a large amount of blood in it. Another sarcastic tone in the poem is when the speaker says 'tough luck' almost implying in a harsh way that it is there own fault for getting blood on the towels. It is also in a mocking tone, which heightens the idea of irony in the poem. Armitage uses contrast throughout the poem, which heightens the ideas of how much blood there is from these cuts. The 'crimson tidemark round the tub' and 'white towels washed a dozen times, still pink.' The crimson contrasted with the white shocks the reader and there is tension created the phrases indicate the brutality of the poem. The idea of the blood being stained in the towels could suggest these cuts on the arms are stains that won't go away in the speakers mind and on his or her skin because there will be a scar. ...read more.

The repetition of 'long' in the last line suggests how long the cut is on the wrist. There are no commas and no breaks in the quote and this shows how endless it is. The oxymoron of 'little' and 'long' suggest multiple cuts and scars that are all different lengths for different reasons. Not only is there repetition of words but also of letters. In the middle of the stanza the letter 'b' is uses to symbolize this idea of innocence and deception as 'you were lashed by brambles picking berries from the woods' heightens this idea. Another key example of this is 'Lacerated skin between the forearm and the fist'. The repetition of the letter 'f' suggests a forceful, firm tone. These two words suggest violence like some sort of 'fist' fight. The word 'punch' towards the end of the poem connotes this idea of violence. The repetition of words and letters help the reader visualize and understand the meaning and ideas clearer. Armitage's use of different tones and images are effective as they show what the speaker is saying. This also portrays the themes of depression and exposure of secrets and characters identity. ...read more.