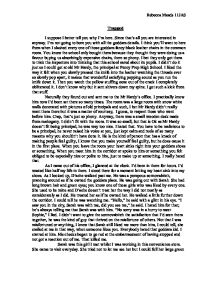 I suppose I better tell you why Im here. Since thats all you are interested in anyway. Im not going to bore you with all the goddam details. I think youll want to here from when I slashed every one of those goddam fancy black leather chairs in

Trapped I suppose I better tell you why I'm here. Since that's all you are interested in anyway. I'm not going to bore you with all the goddam details. I think you'll want to here from when I slashed every one of those goddam fancy black leather chairs in the common room. You know the school only bought them because they thought they were doing us a favour buying us absorbingly expensive chairs, there so phony. I bet they only got them to trick the inspectors into thinking that this school cared about its pupils. I didn't do it just so I could get at old Mr Hardy, the principal at Pency Prep High School. I liked the way it felt when you slowly pressed the knife into the leather watching the threads ever so slowly pop apart, it makes that wonderful satisfying popping sound as you run the knife down it. Then you watch the yellow stuffing ooze out of the crack I completely obliterated it. ...read more.

He was going out with Sarah. She had long brown hair and green eyes; you know one of those girls who was liked by every one. She used to be mine and D'ache doesn't treat her the way I did not nearly as considerately as I did. He treated her as if he owned her. He walked a little further down the corridor. I could tell he was watching me. "Hello," he said with a glint in his eye. "I saw you in the city, Sarah was with me, did you see me," he said. I hated him for that; he's always telling me that Sarah was with him. "No sorry was in a hurry to meet Sophie," I lied. I didn't want to give the sonnovabitch the satisfaction that I'd seen them together, he was the kind of guy that thrived on the misfortune of others. Not that I was misfortuned or anything, I knew that Sarah still liked me more than him, I could tell, she smiled at me in that way, when someone likes you. ...read more.

I didn't want them there they wouldn't have appreciated it. They would only be there because they would feel that they had to enjoy it for my sake. I didn't want them doing anything for me especially my dad. He didn't give a stuff about me. Like when I was in a row with him, he didn't care what I had to say, his opinion was all that counted. He used what ever he could just to get at me. He even told me that my family were dying because of me. I could never forgive him after that. How could some-one say something like that, and if I was I hope that I killed him first. I'm actually glad they sent me to that goddam school, means I don't have to spend any time anywhere near him, and I'm glad to be wasting his precious money, because it cost quite a lot to go to this school. I didn't care. I have had a lousy life, but I don't want to change it because that would mean changing me, and I'm not doing that because that all I have got. If I didn't have my self then I would have nothing. Rebecca Meads 11JAS ...read more.