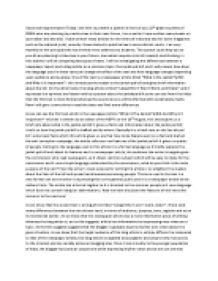 I will be investigating the differences between a newspaper report and a blog article on a common topic: the Janlok pal bill

﻿Good morning everyone! Today I am here to present a speech in front of you 12th grade students of RBKIA who are planning to practice Law in their near future, I am a writer I have written many books on journalism and law also. I have written many articles for the times of India and also for some magazines such as the national jurist, recently I have started to practice law in some district courts .I am very thankful to the principal who has invited me to address you students. This speech could help you as you all are planning to take Law in your future. Journalism requires a lot of research and thinking, in this activity I will be comparing two types of texts. I will be investigating the differences between a newspaper report and a blog article on a common topic: the Janlok pal bill .and I will present how does the language used in these texts can change the effect of the text and how language changes depending upon audience and purpose. ...read more.

a newspaper article, the audience the writer is targeting are the commoners who read newspapers, as it shows common subject which will be easy to relate for the commoners and it uses simple language understood by the commoners, what do you think is the main purpose of the text? I feel the writer?s main purpose for writing this article is to enlighten the readers about the facts of the bill and spread social awareness among people. The tone used in the text is a very formal one as the writer is expressing this to the general public and it is a newspaper article which delivers facts. The article has a formal register as it is directed to the common people as it uses language which does not contain slangs or abbreviations. Now we have discussed the features of this texts lets move on to the next one! As we know that the second text is a blog article titled ?Lokpal Bill, It won?t work, mate!? ,There exist many differences between the two chosen texts, in terms of audience, purpose, tone, register and so on As mentioned earlier. ...read more.

One thinks of the blogger as one who has strong opinions about a variety of things and that he/she may be close-minded. Also we realize that the blogger is also very firm in his decisions and so on. Now as we have finished discussing the features of the two texts we can say These two texts are of two exactly different kind of writing and we can evidently see that how language plays an important role in distinguishing these texts, the language used in the first one makes it formal as it is a newspaper article and the language used in the second text make it very informal as it makes use of slangs and abbreviations ,as we know that the difference in language was because the audience in both the text were different therefore the formal language would appeal more to newspaper reading common public rather than socially active and internet user-friendly people who use blogging sites. ...read more.