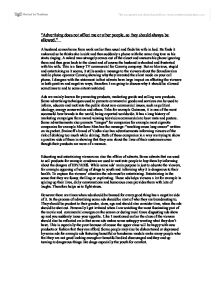 "Advertising does not affect me or other people, so they should always be allowed." A husband comes home from work earlier than usual and finds his wife in bed. He finds it awkward so he thinks she is sick and then suddenly a phone with the same ring tone as his starts ringing. A naked man strangely comes out of the closet and answers his phone ignoring them and then goes back to the closet and of course the husband is shocked and frustrated with his wife. This is a funny TV commercial for Comviq company. But as hilarious, stupid and entertaining as it seems, it stills sends a message to the viewers about the Scandinavian mobile phone operator Comviq showing why they invented the silent mode on your cell phone. I disagree with the statement in that adverts have large impact on affecting the viewers in both positive and negative ways, therefore I am going to discuss why it should be allowed sometimes to and to some extent restricted. ...read more.

These ads helps viewers a lot for example in spicing up their lives, daily conversations and humorous ones provides them with lots of laughs. Therefore helps us to fight stress. However there are times when ads should be banned for every good thing has a negative side of it. In the process of advertising some ads should be alert of who they are broadcasting to. They should be prudent to their gender, class, age and should also consider time, when the ads should be shot out. Personally I get irritated when I am watching the most fascinating part of the movie and commercial emerges on the screen or during meal times disgusting ads show up and you suddenly loose your appetite. Like I mentioned earlier the class of the viewers should also be reflected on in that some ads makes some unhappy wanting what they don't have. This is especially the poor because of course the upper class will be happy with new products or fashion that they can afford. ...read more.

They are simply brainwashed and end up disturbing their parents by crying and pleading for the things that they have just seen even whether they are manipulating or not. They might even try to do what their role models in the ads are doing which is very dangerous for example like dinking "red bull", an energy drink which contains alcohol just to fly like superman. I must conclude that ads have much more positive than negative influences. Ads make many people's life easier in that it reduces stress, entertains. They also help people with various different business firms to sell their products, market goods and also promote their organizations. However there are some special cases when ads should be careful for example who, when and why they are targeting. I belief that in this world, we cannot do without advertisements. It plays a major role in communicating between many different groups e.g a retailer and a consumer. For that reason I would call to action that instead of banning ads we should improve them by excluding exaggeration or manipulation, and vulgar language or obscene videos featuring in ads and all would be well. ...read more.