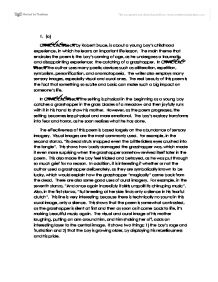 1. (a) Child and Insect, by Robert Druce, is about a young boy's childhood experience, in which he learns an important life lesson. The main theme that encircles the poem is the boy's coming of age, as he undergoes a traumatic and disappointing experience: the catching of a grasshopper. In Child and Insect, the author uses many poetic devices such as alliteration, repetition, symbolism, personification, and onomatopoeia. The writer also employs many sensory images, especially visual and aural ones. The real beauty of this poem is the fact that something so subtle and basic can make such a big impact on someone's life. In Child and Insect, the setting is physical in the beginning as a young boy catches a grasshopper in the grass blades of a meadow and then joyfully runs with it in his hand to show his mother. However, as the poem progresses, the setting becomes less physical and more emotional. The boy's ecstasy transforms into fear and horror, as he soon realizes what he has done. The effectiveness of this poem is based largely on the abundance of sensory imagery. Visual images are the most commonly used. ...read more.

Repetition is used in the poem. The most obvious example is the double usage of the words snatch and quick. What's really interesting is how each word is also used as a comparison between the boy and the grasshopper. In the first stanza, when the boy first catches the grasshopper, he quickly races back to show his mother, and later, the insect quickly comes back to life and jumps away. So this is clearly comparing the quickness of both the boy and the grasshopper. The word snatch is used in the first stanza, as well as in the last stanza. First, it's used to describe the boy snatching the grasshopper; then at the end of the poem, it's used again to describe snatching the insect, but now to destroy it for what it did to him. In a way, the grasshopper actually "snatched" the boy in the end, as "tears were torn from him by petty trickery" and "for leaving him so naked". It shows how some things in life can go completely awry, which causes disappointment. There is some deep symbolism in this poem. The most prominent example would be the grasshopper itself. It symbolizes leaping forward in life, which revolves around the main theme of this poem. ...read more.

Then, the grasshopper returns from the dead and now the boy is feeling angry and relieved at the same time. He feels angry because he is mad at the grasshopper for tricking him and making him feel guilty for nothing. However, he also feels relieved that he didn't kill it, but then at the end he says that he could gladly snatch up the grasshopper again and "shatter it" for what it did to him. This shows how his emotions got the better of him, and would actually make him kill the grasshopper. From this, you can see that he is still not a man. Child and Insect, by Robert Druce, is a poem about the frustration in life that everyone starts to experience at a certain age. The poem uses a simple but appealing image of a very gentle situation in a child's life. The poem is quite contrasted, which is true of life in general. The imagery shows this contrast as the sensory imagery changes from positive to negative, as well as the mood and tone. The symbolism of the grasshopper gives an underlying theme of moving forward, which relates to the coming of age. The effectiveness of this piece is largely based on the figurative language and the imagery, which in both cases, were magnificent. ...read more.