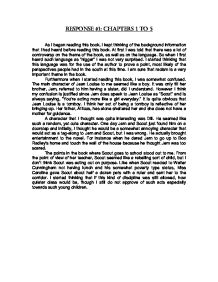 Response #1: Chapters 1 to 5 As I began reading this book, I kept thinking of the background information that I had heard before reading this book. At first I was told that there was a lot of controversy on the theme of the book, as well as on the language. So when I first heard such language as "nigger" I was not very surprised. I started thinking that this language was for the use of the author to prove a point, most likely of the perspectives people had in the south at this time. I am sure that racism is a very important theme in the book. Furthermore when I started reading this book, I was somewhat confused. The main character of Jean Louise to me seemed like a boy. It was only till her brother, Jem, referred to him having a sister, did I understand. However I think my confusion is justified since Jem does speak to Jean Louise as "Scout" and is always saying, "You're acting more like a girl everyday." It is quite obvious that Jean Louise is a tomboy. I think her act of being a tomboy is reflective of her bringing-up. Her father, Atticus, has alone sheltered her and she does not have a mother for guidance. A character that I thought was quite interesting was Dill. He seemed like such a random, yet cute character. One day Jem and Scout just found him on a doorstep and initially, I thought he would be a somewhat annoying character that would act as a tag-along to Jem and Scout, but I was wrong. He actually brought entertainment to the novel. For instance when he dared Jem to go up to Boo Radley's home and touch the wall of the house because he thought Jem was too scared. The points in the book where Scout goes to school stood out to me. ...read more.

Cunningham about his son. I thought talking about his son made Mr. Cunningham be somewhat emotional towards the whole situation. This is also the point where we hear Tom Robinson's first words in the novel. I thought this was a significant part in the book, as it seems that Tom will soon become a character with a lot of importance. At the end of this scene, I was also surprised that Atticus was not mad after his children had snuck out of bed to come see him. I don't think that he was just being a lazy parent, but that he saw maturity in Jem after he refused to leave Atticus alone with these men and I think he was proud, as well. The beginning of the trial also began in this section. Atticus seemed very suave as he questioned the witnesses. Some of the questions appeared useless, but as a lawyer, I 'm sure he knew what he was doing. One could tell that he was planting a seed that could eventually lead to accusing Mr. Ewell of beating Mayella. I thought it was actually quite humorous when Judge Taylor told Mr. Ewell to keen his language "within the confines of Christian English usage." I think this shows Mr. Ewell's lack of respect and education towards society with women and children in the court. I am very curious to know what Mayella and Tom will have to say when they get to the witness stand. I actually had an exact opposite view from you. Hearing of Aunt Alexandra's arrival, I was quite glad and expecting a positive change in the Finch family. The aunt's arrival meant that the Finch family would live a more balanced lifestyle. Atticus would have someone to help him, especially with looking after Scout and Jem. The children would benefit as well because Aunt Alexandra would act like their mother, and they would gradually accept her. ...read more.

As a black person, I believe that at this time his existence was as important as a mockingbird's. One can easily get over the death of a mockingbird and therefore the town could easily forget the significance of a black man who was shot to death. Just because Tom Robinson was black, no appreciation was shown towards him. He was stepped all over, crushed to pieces, but nobody seemed to care. In the novel, the majority of the population was white people. They were at the top of the societal ladder because they possessed all the power. In the medieval times, there were hierarchical scales, ranking the different social classes. Currently, this type of ranking still continues, although everyone knows it should not. As seen, people such as Aunt Alexandra, Cecil Jacobs, and Cousin Francis hurled insults at Atticus when he tried to help Tom Robinson. These powerful white people were completely unwilling to aid the blacks when they needed help (with the exception of Atticus). While we have the opportunity to help someone, we should do so. In the novel, Atticus said to Scout, "maybe you'll look back on this with some compassion and some feeling that I didn't let you down. This case, Tom Robinsons' case, is something that goes to the essence of a man's conscience." He says this decisively and assertively, showing that he would defend this black man no matter how others discouraged him from doing so. Personally, I believe that there is karma. Bob Ewell was an untrustworthy and awful man, so in return, he got what he deserved. He had warned Atticus to be careful because he would get him even if it took the rest of his life. His attitude was just sickening and made me dislike him even more. In the end, he was believed to have fallen and stabbed himself with his own knife. He died in his own hands, which supports the belief of karma since he had done evil deeds all his life. ...read more.