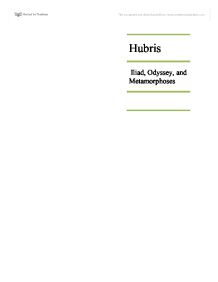 Hubris Iliad, Odyssey, and Metamorphoses Hubris was an immense factor in the Greek's lives, which is shown through mythology. Hubris is having excessive pride or superiority, the idea of being the best. When the Greek's thought as highli of themselves as the gods, they ran into many problems, and the gods promised them much misery to come. Hubris, over pride was often one of the main issues for mortals and heroes in Greek mythology. The Iliad, The Odyssey and The Metamorphoses are the three myths that will be used to represent this. An excellent example of hubris can be found in The Odyssey, which is fundamentally about the warrior Ulysses and his adventurous return to his homeland, Ithaca. The most vital instance in which Ulysses demonstrated hubris was while him and his men were trying to escape from the Cyclops, Polyphemus. Ulysses and his men first drugged the Cyclops and then stabbed its eye making it blind. While Ulysses' men all escaped from the cave to their boat, Ulysses started to yell at Polyphemus, because he was proud of beating the Cyclops. ...read more.

When Paris fights with Menelaus, Aphrodite snatches Paris away, and sets him down in his bedroom filled with scent. It's not Paris' fault that Aphrodite saves him from death. His fault comes from how he deals with being saved. Paris doesn't feel the need to go back to war right away, so he tells Helen, "but come, let's go to bed let's lose ourselves in love." Paris is blinded by his own hubris. His hubris denies him of the fact that his people are dying for his pleasures, which they themselves have given up. Paris is way past the point where he can eliminate himself of hubris. The only thing he cares about is himself, so a loss of something or someone dear to him wouldn't make him feel anything. Another example of hubris is during the battle between the Achaeans and the Trojans, Hector decided to wear Achilles' armour. By doing this act, it seems that Hector was trying to relate himself as the equal of the mighty Achilles. ...read more.

Athena was angry that Arachne would say such things, so she challenged Arachne to a weaving contest. Athena had woven a beautiful cloth showing the gods and goddesses sitting together in Mount Olympus and doing good deeds for mortals. Arachne, on the other hand, displayed more signs of hubris, when she had woven a cloth showing the gods and goddess getting drunk. When Athena saw it she was even angrier than she had been before. Arachne's cloth was clearly better than Athena's cloth, but Athena didn't care. Athena then directed a finger at Arachne and turned her into a spider. Overall, hubris over pride is often of the main issues for mortals and heroes in Greek mythology that causes them to get into large inconveniences. It doesn't matter how first-rate or capable you are in something, the gods will never accept you being the greatest, only second to best. If Polyphemus hadn't believed that because he is a giant, he is unbeatable by anyone, even a god. If Polyphemus hadn't let the men in the cave, he would have been alive, not stabbed in the eye. These are all key example of why hubris, arrogance should be avoided to not have wrath from the gods. ...read more.