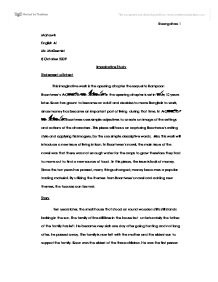 Mohawk English A1 Mr. McDermid 8 October 2009 Imaginative Study Statement of Intent This imaginative work is the opening chapter the sequel to Kampoon Boontwee's A Child of the Northeast. In the opening chapter is set in Isan, 10 years later. Koon has grown to become an adult and decides to move Bangkok to work, since money has become an important part of living during that time. In A Child of the Northeast, Boontwee uses simple adjectives to create an image of the settings and actions of the characters .This piece will focus on capturing Boontwee's writing style and applying his imagery, by the use simple descriptive words. Also this work will introduce a new issue of living in Isan. In Boontwee's novel, the main issue of the novel was that there was not enough water for the crops to grow therefore they had to move out to find a new source of food. In this piece, the issue is lack of money. Since the ten years has passed, many things changed; money becomes a popular trading material. By utilizing the themes from Boontwee's novel and adding new themes, the focuses can be met. ...read more.

Upon the dawn of an orange morning, Koon rises early and finds his mother sitting on the steps at front during smiling to the rising sun. The easing breeze blows her dry hair back. "Look at it son, it's beautiful," says his mother. "Yes mother, it is," Koon answered politely and smiles at his mother. A gushing breeze blows through the door way and made a loud whistle. "Mother," Koon started, "I want to go to Bangkok." "Why is that son?" "I want to go and work there." "We are happy here, like this aren't we?" "I just want to help you more mother, I want us to have more money and I can find a lot of money there," he says with joy. "We do not need money to be happy son; as long as we have each other we will be happy. Can't you see?" Koon's mother says with a little concern, "but you are eighteen years old now, you are old enough to make your own decisions." The wind stopped blowing and an awkward silence fills the village; Koon ponders hard about leaving his home for the city. ...read more.

"I'm so hungry," adds Yee-soon. "Let's bring this to the dinner table so we can all have something to eat this morning. I'll go call mother" As Koon walk out of the kitchen, Koon continues his ponder about leaving Isan to go to Bangkok. The value of money has changed as the time has passed. 10 years ago, people would trade items for items, but as ten years passed people only trade for money. And since it has become popular, the prices of food and items of everyday use have risen. Koon believes if the family had more money, life would be so much easier to live, despite what his mother had said to him earlier in the morning. If he works in Bangkok he will get twice much money than selling vegetables. But Koon also worries about his mother, because she is become an aged woman; he wasn't sure if Boonlai and Yee-soon can take care of her. Koon arrives outside and calls for his mother. "Mother! The food is ready." Koon ran towards her to help her walk to the kitchen. By the time Koon and his mother arrived to the kitchen, Boon-lai and Yee-soon are waiting at the dinner table. Koon and his mother sat down and they all had lop together. Word Count: 1,226 ?? ?? ?? ?? Roongchao 1 ...read more.