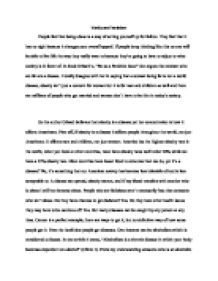 In Susie Orbachs, Fat as a Feminist Issue she argues that women who are fat are a disease. I totally disagree with her in saying that a woman being fat is not a world disease, obesity isnt just a concern for women

Vanity and feminism People feel that being obese is a way of setting yourself up for failure. They feel that it has no right because it changes your overall appeal. If people keep thinking like this no one will be able to live life the way they really want to because they're going to have to adjust to what society is in favor of. In Susie Orbach's, "Fat as a Feminist Issue" she argues that women who are fat are a disease. I totally disagree with her in saying that a woman being fat is not a world disease, obesity isn't just a concern for women but it is for men and children as well and there are millions of people who get married and women don't have to be thin in today's society. So the author Orbach believes that obesity is a disease yet her concentration is how it affects Americans. First off, if obesity is a disease it affects people throughout the world, not just Americans. It affects men and children, not just women. America has the highest obesity rate in the world, when you look at other countries, most have obesity rates well under 20% while we have a 25% obesity rate. ...read more.

The author is implying that children are overweight and even when they reach their adulthood it's almost impossible for them to lose the weight they have gained as children. The author discourages women who are obese into thinking that they have to present themselves in a sexual and appealing manner, yet millions of women who are fat/obese are married and have children, and do all the duties that are required of them. Yet we talk about this as a disease because we don't accept it, we don't accept people's differences and are forcing people to comply with these changes. She states that women are sex objects, possessions to be held and kept. Not only does she disrespect the value of women in our society but disrespects herself. With attitudes like Susie, it's no wonder why some women and teenagers become anorexic and become too thin to look like the skinny models we insist are beautiful, which is also viewed am issue disease. So either way you look at it, we're aiming the bar at perfection and causing people to revolt against the media. We need to accept each other and show the world that we can be accepting of people's differences and that is no clear or definite way to look beautiful. ...read more.

I totally disagree with her in saying that a woman being fat is not a world disease, obesity isn't just a concern for women but it is for men and children as well and there are millions of people who get married and women don't have to be thin in today's society. Women must be able to live their lives the way they want too without having to meet some criteria that was created by our imagination. Men clearly don't mind having a woman that is a bit overweight. It's definitely not a disease because if it were then scientists would be trying to find a cure for it. Also a woman being obese does not only affect her it affects men and children as well. We have to pay attention to both men and children as well, especially children because they're the future of our kind. If we can't help them then we have no future and we will end up as a world where obesity will be part of our lives. If we don't want this to be taking over who we are and what we are as people we obviously must do something about it. We can't just go around putting women down for being obese. They're the ones who are creating life and they're the ones who ultimately will decide whether we change ourselves into becoming healthier people. ...read more.