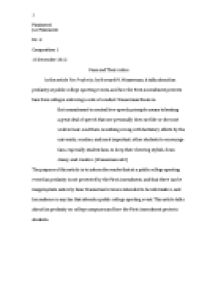 In the article Fan Profanity, by Howard M. Wasserman, it talks about fan profanity at public college sporting events, and how the First Amendment protects fans from colleges enforcing a code of conduct.

﻿Pizzimenti Joe Pizzimenti Mr. G Composition 1 13 December 2012 Fans and Their Antics In the article Fan Profanity, by Howard M. Wasserman, it talks about fan profanity at public college sporting events, and how the First Amendment protects fans from colleges enforcing a code of conduct. Wasserman thesis is: But commitment to neutral free-speech principle means tolerating a great deal of speech that one personally does not like or does not wish to hear. And there is nothing wrong with hortatory efforts by the university, coaches, and most important, other students to encourage fans, especially student fans, to keep their cheering stylish, clean classy, and creative. (Wasserman 643) The purpose of this article is to inform the reader that at a public college sporting event fan profanity is not protected by the First Amendment, and that there can be inappropriate antics by fans. Wasserman?s tone is intended to be informative, and his audience is any fan that attends a public college sporting event. ...read more.

Another example that supports Wasserman?s stance is Cohen verse California. This was when a man named Paul Cohen wore a jacket that said ?F--- the Draft.? Paul Cohen did not get in trouble because the Supreme Court found this message to be protected in the courthouse. Wasserman says, ?Justice John Marshall Harlan?s memorable phrase in Cohen was that ?one man?s vulgarity is another?s lyric,? and government?s inability to make principled distinctions means ?the Constitution leaves matters of taste and style so largely to the individual?? (Wasserman 641). This proves that the First Amendment protects us Americans in many circumstances, therefore; if a college wants to write a code of conduct it must be worded carefully. Wasserman also talks about how fans at a stadium have the choice to leave, but in Cohen verse California they were required to stay in the courthouse because it was their job. Lastly, is the case with Texas Tech?s basketball coach Bob Knight. ...read more.

Wasserman used both Ethos and Logos in this article. Ethos was used with all his credible facts given throughout the article. Logos was used throughout the article because he logically showed facts to back up his thesis. This topic is significant to me because I plan on playing college hockey in the upcoming years. I would not want my team to be looked down upon because of something the fans did or said. This is also significant to many young kids who attend these games because they could be easily influenced by some of the fans profanity. I believe that fans should be encouraged to cheer on their team but keep profanity to a minimum. Fan Profanity can put a bad image on the school, influence people in many ways, and cause people to be insecure with going to the games. I believe that because most public college sporting events are paid events that the First Amendment should not apply. Fans pay to watch the game not the profanity, therefore; fan profanity should be eliminated. ...read more.