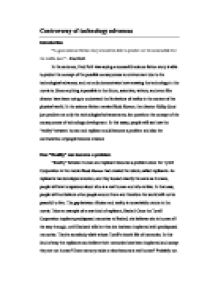 In the science fiction movies Blade Runner, the director Ridley Scott just predicts not only the technological advancements, but questions the concept of the consequences of technology development.

Controversy of technology advances Introduction "A good science fiction story should be able to predict not the automobile but the traffic Jam." - Fred Pohl In the sentence, Fred Pohl was saying a successful science fiction story is able to predict the concept of the possible consequences to environment due to the technological advances, and not only demonstrates how amazing the technology in the movie is. Since anything is possible in the future, scientists, writers, and even film director have been trying to understand the limitations of reality in the context of the physical world. In the science fiction movies Blade Runner, the director Ridley Scott just predicts not only the technological advancements, but questions the concept of the consequences of technology development. In this essay, people will see how the "reality" between human and replicant could become a problem and also the contradiction of people become creators How "Reality" can become a problem "Reality" between human and replicant becomes a problem since the Tyrell Corporation in the movie Blade Runner had created the robots, called replicants. ...read more.

Does memory make a robot become a real human? Probably not. Because of that, no matter human or relipcants are aiming to find out who are they and how long could they alive. Since that, people starting suspicious to each other. Finally, it will truly become a disaster between human and replicants and even lose their minds. No matter in the movie or real world, I believe that the four years lives is not enough for us to alive, and this can be a possible reason to cause replicants started resist human. One of the traffic jams like this had availably demonstrated by the movie. Right or wrong Replicants could be possibly created to benefit humans but also be harmful to the society. This means people are difficult to judge right or wrong by human try to be a creator and exceed the "God". ...read more.

This is another consequence that the director wants us to consider by seeing the movie. Conclusion The main purpose of this film seems to ask readers, "should human become a creator of technology?" Although technology is able to benefit our society and our lives, sometimes "Playing God" would lead many serious consequences because of the technological advances. The movie Blade Runner tries to demonstrate to humans that "Once you think you have gained enough abilities to be a creator, you always have to consider all the possible consequences by making it, otherwise, there would not have any benefits only disaster and you will become a sinner." By writing the essay, people can see the movie Blade Runner is a successful film that able to demonstrate the controversy of technological advances. It leads the reader to cogitate about technology in an ethical way. It is perfectly suited the definition of Fred Pohl. "A good science fiction story should be able to predict not the automobile but the traffic jam." ?? ?? ?? ?? ...read more.