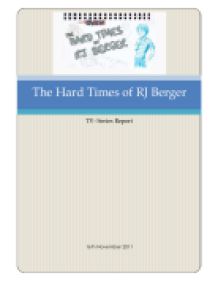 In the show The Hard Times of RJ Berger, we follow the life of the main character, RJ Berger. RJ is quite an unpopular student at Pinkerton High School, who is bullied by Max Owen and his other sports friends.

Topic: The Hard Times of RJ Berger Writer: Seth Grahame-Smith Readers: Youths / Teenagers Language: Informal incorporating slang Genre: Sitcom Series start: June 6, 2010 Series end: May 3, 2011 Number of Seasons: 2 Number of episodes: 24 Running time: 22 minutes Channel: MTV Viewers (first episode): 2.6 million Camera setup: single-camera Distributor: MTV Networks International Appetizer In the show The Hard Times of RJ Berger, we follow the life of the main character, RJ Berger. RJ is quite an unpopular student at Pinkerton High School, who is bullied by Max Owen and his other sports friends. RJ has two close friends who are also the main characters of the series. These two friends are Miles Jenner, whose main aspiration is to become popular, at the school. Lilly Miran is one of RJ's other friends who has known and been longing for RJ for a long time, and she is always trying to attract him. RJ however is not interested in Lilly and has his eyes set on Jenny Swanson, a cheerleader at the school. Introducing Atmosphere and Overview In episode one of The Hard Times of RJ Berger, we are introduced to Richard's (RJ for short) ...read more.

There are several scenes which take place in the main character's home, but the theme of the series is mainly influenced by iconic moments of being in high school. The series portrays this iconism, through RJ Berger, the main protagonist and the leading star of the show - And it is through RJ, that the film portrays certain difficulties that high school students are confronted with - Mainly being embarrassed by their parents and the highly tough task of finding the most beautiful girl. Indeed the series shows this iconism excellently, mainly because of RJ Berger. RJ is portrayed as a nerd, and a socially awkward 15 year old high school student who currently is undergoing his second year as a sophomore. The series shows RJ as a talented and gifted person, but also as someone who is either picked on or just generally ignored by the people around him. The problem is, RJ is unpopular, yet he is in love with the school's arguably most beautiful girl - Jenny Swanson. His unpopularity is not his only problem however, as he is often very shy as well, and is also afraid of Jenny's boyfriend - Max - Who is known to the school as a popular, handsome and a great athlete - possessing the exact opposite abilities ...read more.

When analyzing series, the Hollywood Model is a model that is used to analyses the structure of films and often times, texts. It shows how the movie's/book's suspense build up in plot, conflicts and resolution. Unusually, in the first two episodes, no conflicts have been solved. This is another sign that the writer of these episodes is still luring you and keeping the suspense in the series as to keep you interested. It would be silly if there was a huge conflict started and the resolution came in the same episode. Strangely enough, in the following episode, RJ and Max have yet another clash when RJ's proposition to the Student Government Association for Computer Club funding is denied; he angrily decides to run against them in hopes of becoming the schools new S.G.A. president. When speeches are made and ballots counted, Max wins the election with no surprise. The crucial moment when all is resolved after the conflict is skipped for the second episode in a row. Fade out Even with RJ losing the election and individually getting 12 votes. Only able to account for 11 of them, RJ then notices Jenny holding a button that RJ made for his campaign. So happy that his dream girl voted for him, RJ then has a smile on his face and expresses his joy by saying that it never felt so good to lose. ...read more.