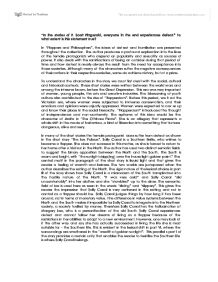 &quot;In the stories of F. Scott Fitzgerald, everyone in the end experiences defeat.&quot; To what extent is this statement true?

"In the stories of F. Scott Fitzgerald, everyone in the end experiences defeat." To what extent is this statement true? In "Flappers and Philosophers", the ideas of defeat and humiliation are presented throughout the collection. The author produces a profound exploration into the lives of the female protagonists who depend on popularity and sexuality as sources of power. It also deals with the ramifications of being an outsider during that period of time and how defeat is nearly always the result from the need for acceptance into those societies. Although many of the characters suffer the negative consequences of their actions in their respective societies, some do achieve victory, but at a price. To understand the characters in the story we must first deal with the social, cultural and historical contexts. These short stories were written between the world wars and among the interwar boom, before the Great Depression. This era was very important of women, young people, the arts and creative industries. The blossoming of youth culture also contributed to the rise of "flapperdom". Before this period, we had the Victorian era, where women were subjected to immense conservatism, and their emotions and opinions were unjustly oppressed. Women were expected to cover up and know their place in the social hierarchy. "Flapperdom" introduced the thought of independence and non-conformity. ...read more.

Sally Carrol experiences defeat and cannot follow her dreams of living as a flapper because of the restrictions in her abilities to adapt to a new environment. However, one may look at it the other way and say she has actually succeeded in living the life she is most suitable for - the Southern life. This is evident in the lexical shift in part VI, where the surroundings are smothered in the "wealth of golden sunlight". This parallels part I of the story provides a certain unity that enables the reader to feel like the Southern life is where Sally Carrol belongs. In "Bernice Bobs Her Hair", Bernice deals with the problem of being an outsider to an elite society full of successful people. She is seduced into "flapperdom" by Warren, who initiated the process by flirting with her. The remark that she had an "awfully kissable mouth" made her excited enough to change into someone who is obsessed with superficiality. She becomes an artificial flapper, a shadow of Marjorie. The struggle for acceptance is evident through the fact that even though the ideas underpinning their belief system is from two different paradigms, Bernice still learns to grasp onto that vibrant and fleeting youth. ...read more.

Again, towards the end, she gains a sense of victory when she destroys the cut-glass bowl that has destroyed her life. Even here, the author stresses how vulnerable and helpless Eveyln is as she struggles to smash the bowl. The lexical choice here is in the sematic field of difficulty and uneasiness. She had to "tighten her arms" and her muscles were "tauted". Her energy was "desperate" and "frantic", and her effort was "mighty" and "strained". The author cleverly uses the juxtaposition of the size of the bowl with the size of Evelyn to accentuate the difficulty she experiences. Furthermore, the repetition of the phrase: "she must be quick - she must be strong" shows that although she does suffer defeat, victory and liberation can be achieved through great difficulty. In his short stories, F Scott Fitzgerald has made sure everyone at the end suffers some kind of defeat. This is achieved by Ardita in "The Offshore Pirate" being humiliated, Sally Carrol in "The Ice Palace" returning to her hometown, Bernice in "Bernice Bobs Her Hair" bobbing her hair, and Evelyn in "The Cut-glass Bowl" losing the essence that used to define her as a flapper. However, the author has also made us realise that in life, even though we may experience defeat and humiliation, we must look within ourselves and find that personal victory that will surpass the negative feelings of loss. ...read more.