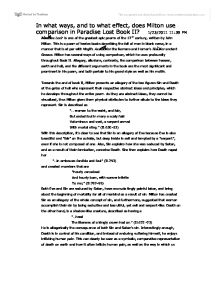 In what ways and to what effect, does Milton use comparison in Paradise Lost Book II?

Paradise Lost is one of the greatest epic poems of the 17th century, written by John Milton. This is a poem of twelve books describing the fall of man in blank verse, in a manner that is at par with Virgil's Aeneid for the Romans and Homer's Iliad for ancient Greece. Milton has several ways of using comparison, which he uses profoundly throughout Book II. Allegory, allusions, contrasts, the comparison between heaven, earth and hell, and the different arguments in the book are the most significant and prominent in his poem, and both pertain to his grand style as well as his motifs. Towards the end of book II, Milton presents an allegory of the two figures Sin and Death at the gates of hell who represent their respective abstract ideas and principles, which he develops throughout the entire poem. As they are abstract ideas, they cannot be visualized, thus Milton gives them physical attributes to further allude to the ideas they represent. Sin is described as "... woman to the waist, and fair, But ended foul in many a scaly fold Voluminous and vast, a serpent armed With mortal sting." ...read more.

This can be noted in "What can be worse Than to dwell here, driven out from bliss, condemned In this abhorred deep to utter woe; Where pain of unextinguishable fire..." (II.85) and a few lines later he states "He from Heaven's higth"(II.190) Contrasts like these are important because they help us to further extend our understanding of Milton's paradigms of food and bad, and from this, we can deduce that the absence of light in Hell and in Satan symbolize the absence of God in all his glory. Milton's contrasts of light and dark, and high and low to convey good and bad are also used to contrast Heaven, Hell and Earth. Milton presents a hierarchy based on the proximity to God. Heaven is at the top of the hierarchy where "Heaven's high Arbitrator" (II.359) sits, and the primary quality is light. Hell is at the very bottom of the hierarchy and is portrayed as the antithesis of heaven, which is primarily dark. "As he our darkness, cannot we his light"(II.269) Is a phrase which best portrays the strong contrasts between the two places. Earth is depicted as the young, vulnerable middle-ground connected to both Heaven and Earth. ...read more.

The reason Beelzebub's proposal is agreed upon is because Milton believes that Earth, and therefore Mankind, is the neutral, middle-ground between Heaven and Hell, Angels and Devils, as well as good and evil. It therefore serves as an effective battleground for good and evil forces on earth, as well as in the souls and consciences of mankind. The effect of these comparisons gives us further insight into the beliefs of the philosophical and theological elements in Milton's time period, as well as the relative forces of good and evil, and how they effect the lives of mankind. In conclusion, there are various ways that Milton uses comparison in Paradise Lost, which each have different effects that range from the introduction of multiple interpretations, to simply extending our understanding of the story through vivid imagery. The comparisons that Milton uses are so complex that they are all connected in some way or other, and this alone gives us an even deeper understanding of the theological and philosophical messages conveyed in the poem. Ultimately, Milton's intension was to tell the story of Man's fall, and with his comparisons, he has managed to do much more than just that. Words: 2069 In what ways, and to what effect, does Milton use comparison in Paradise Lost Book II? 1/23/11 11:39 PM 1/23/11 11:39 PM ...read more.