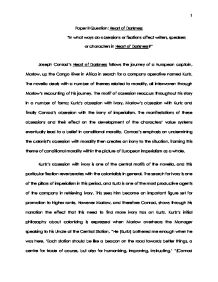 In what ways do obsessions or fixations affect writers, speakers or characters in Heart of Darkness?

Paper II Question: Heart of Darkness "In what ways do obsessions or fixations affect writers, speakers or characters in Heart of Darkness?" Joseph Conrad's Heart of Darkness follows the journey of a European captain, Marlow, up the Congo River in Africa in search for a company operative named Kurtz. The novella deals with a number of themes related to morality, all interwoven through Marlow's recounting of his journey. The motif of obsession reoccurs throughout his story in a number of forms; Kurtz's obsession with ivory, Marlow's obsession with Kurtz and finally Conrad's obsession with the irony of imperialism. The manifestations of these obsessions and their effect on the development of the characters' value systems eventually lead to a belief in conditional morality. Conrad's emphasis on undermining the colonist's obsession with morality then creates an irony to the situation, framing this theme of conditional morality within the picture of European imperialism as a whole. Kurtz's obsession with ivory is one of the central motifs of the novella, and this particular fixation reverberates with the colonialists in general. The search for ivory is one of the pillars of imperialism in this period, and Kurtz is one of the most productive agents of the company in retrieving ivory. ...read more.

Kurtz's obsession with ivory was what had led to him to the point where he had abandoned morality completely, and adopting his philosophy of what can be called conditional morality, acting 'civilly' or 'savagely' depending on the situation. This philosophy of conditional morality also impacted the character development of Marlow. Marlow had a obsession with understanding Kurtz, he had begun his journey with grand ideas about the colonists. He disapproved of savagery, admiring the Accountant's persistence on dressing well, and constantly reminding himself to remain civil. He showed high disdain for lack of restraint, condemning both his African helper on the boat and Kurtz, "Poor fool! If he had only left that shutter alone. He had no restraint, no restraint - just like Kurtz - a tree swayed by the wind" (85). As an explanation of his obsession with Kurtz Marlow says, "I was curious to see whether this man, who had come out equipped with moral ideas of some sort, would climb to the top after all, and how he would set about his work when there" (55). He recognizes that Kurtz's values might have changed and as his obsession with Kurtz grew more potent, he begins to be influenced by Kurtz's behavior. ...read more.

Conrad uses the phrase to reflect the motives of the European colonialists, and their obsession with the 'abomination', imperialism. Conrad continues undermining the colonist's obsessions, "Principles? Principles won't do. Acquisitions, clothes, pretty rags - rags that would fly off at the first good shake. No; you want a deliberate belief" (63). Conrad's criticism of the obsession with alleged morality is not only an echo of Marlow and Kurtz's eventual realizations that morality was not a truthful concept, it is also an echo of his position on European imperialism. Conrad's emphasis on the motif of obsession in Heart of Darkness carries the theme of conditional morality. Marlow and Kurtz both come to the realization that morality is relative through their obsessions, while Conrad's undermining of the European obsession with imperialism supports that the colonialists' morality is also relative. The motif also supports a number of other themes in the novella, such as the distinction between civilization and savagery and between sanity and insanity. Conrad creates universality in the novella by crafting the motif in a way particular to the novel, but then expanding its effect on the theme in way that allows readers to relate to the issues on a wider level. ...read more.