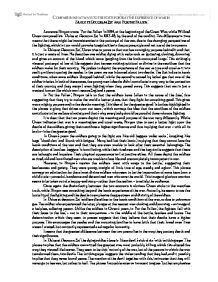 COMPARE IN WHAT WAYS TO THE POETS PORTRAY THE EXPERIENCE OF WAR IN 'DULCE ET DECORUM EST' AND 'FOR THE FALLEN'. Laurence Binyon wrote ' For the Fallen' in 1914, at the beginning of the Great War, while Wilfred Owen composed his ' Dulce et Decorum Est' in 1917-18, by the end of the conflict. This difference in time means that there might be inconsistencies in the portrayal of the war, due to the changing perspectives of the fighting, which in turn would provoke irregularities in the purpose, style and nature of the two poems. In 'Dulce et Decorum Est', Owen tries to prove us that war has no mighty purpose behind it and that it is just a waste of lives. He describes one soldier dying with verbs such as 'guttering, choking, drowning' and gives an account of the blood which came 'gargling from the froth-corrupted lungs'. This strikingly visceral portrayal of loss of life suggests that he sees nothing spiritual or divine in the sacrifices that the soldiers make for their country. He prefers to depict the experience of the war as true and cruel as it is in reality without sparing the reader. In the poem we are informed about two deaths. ...read more.

The soldier who experienced the later, plunges at the nearest men choking and drowning - an image of a helpless, suffering person. Unlike the soldiers in Owen's poem, in 'For the Fallen', the fighters 'fell with their faces to the foe', - not to their companions - in the middle of the battle, fearless and brave. The determination which they seem to possess suggests that they believe that their deaths have a higher purpose. This encourages the reader and the mourning families to have faith that their loved ones' lives weren't wasted, but contrarily represented a salvage for humanity. It seems that the greatest difference between the two poems lies in the way they portray death and their significance. In 'Dulce et Decorum Est' the dying soldier's face is 'like a devil's sick of sin' with 'writhing eyes'. The phrase implies that the soldiers committed the greatest sins, most probably killing, which this altered the way they viewed life forever. They seem to be 'sick' not only of the war, but of the persons in which the war transformed them, into devils. The 'writhing eyes' suggests the violent ending that they had, and it possibly implies that they never found peace. ...read more.

Owen, who wrote the poem by the end of the conflict, seems to be well informed about the direct experience of the war and at the same time he is aware of the patriotic and idyllic accounts that existed at the beginning of the fighting. This explains the angry, visceral and meaningless deaths which he depicts in his poem, almost as if he was angry about people lying and making war seem a worthy, purposeful thing. And indeed, his poem ends with a call to other people not to 'tell with such high zest/To children ardent for some glory, / the old Lie: Dulce et decorum est/ Pro patria mori (It is sweet, and honourable to die for one's country). Owen wrote as an answer to other poems such as Binyon's which glorify the experience of war, and this is why he chose the title 'Dulce et decorum est', to arise the memory of the patriotic accounts from the beginning of the war, and then throughout his poem to shatter 'the old Lie'. He personifies this lie with the capital letter, making it seem as a destructive, evil person. This is the reason why Owen sticks to visceral descriptions - he prefers not to spare the reader, because he believes that the Lie is even crueller than the merciless reality of the war. ?? ?? ?? ?? ...read more.