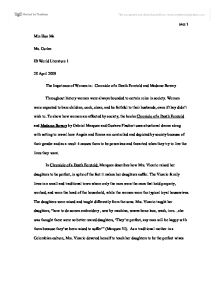 Min Hua Ma Ms. Curlee IB World Literature 1 20 April 2009 The Impotence of Women in: Chronicle of a Death Foretold and Madame Bovary Throughout history women were always bounded to certain roles in society. Women were expected to bare children, cook, clean, and be faithful to their husbands, even if they didn't wish to. To show how women are affected by society, the books Chronicle of a Death Foretold and Madame Bovary by Gabriel Marquez and Gustave Flaubert uses situational drama along with setting to reveal how Angela and Emma are controlled and depicted by society because of their gender and as a result it causes them to be powerless and thwarted when they try to live the lives they want. In Chronicle of a Death Foretold, Marquez describes how Mrs. Vicario raised her daughters to be perfect, in spite of the fact it makes her daughters suffer. The Vicario family lives in a small and traditional town where only the men were the ones that held property, worked, and were the head of the household, while the women were the typical loyal housewives. ...read more.

Likewise in Madame Bovary, Flaubert uses the situation where Emma desires a son to show how women are restricted and men are liberated to many opportunities. Emma is a middle classed woman living in France during the 1850's, and during this time, women were supposed to be obedient housewives with limited rights. After being tired of being a limited woman during her pregnancy, "she wanted a son...this idea of having a male child was a promise of compensation for all her past frustrations. A man is free...a woman is continually thwarted, inert, complaint...she struggles against her physical weakness and legal subjection" (Flaubert 84). In this situation, Flaubert uses the setting of the mid 1800's to show how the societal norms causes Emma to be frustrated of who she is because she was already born restricted in life, which makes her desire a son. Emma describes that having a son is 'a promise of compensation for all her past frustrations,' this confirms what Emma always wanted in life; being free to roam without worry, but instead, her gender forces her to be suppressed and bounded to what she is given in life and not what she has worked for. ...read more.

Emma is powerless in trying to live a fairytale life, and the consequences of her affair with Rodolphe cause her to grief and, hate her bounded obedient and powerless life even more. In the end, the societal norms in the books Chronicle of a Death Foretold and Madame Bovary, explains how the characters Angela's and Emma's lives are encircled to be powerless because of their gender. Angela and Emma both try to live life as they desire to, but they end up living a life they do not wish to have because of the societies they live in. Angela is forced to be taught specific household work and into an arranged marriage, despite of her pleas. Emma is strained to desire a boy as her child in order to escape her limits in society, but is heart broken by her dreamy lover. Together these books put out the message to the reader of how the roles of women have changed from the past to now. And it shows how our rights shouldn't be something to be taken for granted because without the new modern laws, women today would not have the same and equal opportunities as men have. Word count: 1,495 ?? ?? ?? ?? Ma 1 ...read more.