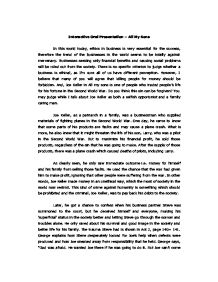 Interactive Oral Presentation - All My Sons In this world today, ethics in business is very essential for the success, therefore the trend of the businesses in the world seems to be totally against mercenary. Businesses seeking only financial benefits and causing social problems will be ruled out from the society. There is no specific criterion to judge whether a business is ethical, as I'm sure all of us have different perception. However, I believe that many of you will agree that killing people for money should be forbidden. And, Joe Keller in All my sons is one of people who traded people's life for his fortune in the Second World War. Do you think this sin can be forgiven? You may judge while I talk about Joe Keller as both a selfish opportunist and a family caring man. Joe Keller, as a patriarch in a family, was a businessman who supplied materials of fighting planes in the Second World War. ...read more.

George says, "Dad was afraid. He wanted Joe there if he was going to do it. But Joe can't come down... He's sick. Sick! He suddenly gets the flu!" Another evidence is that Joe promised to take the responsibility on a phone call, which cannot be solid evidence later. The action Joe Keller took was not simply about ditching his business partner, but also becoming a cruel spectator of somebody becoming a loser of life. Joe was also a coward. He was not brave enough to accept his sin and face the responsibilities. The speech of Joe in Act 2, page 156~ 158 shows that he tries to deny his fault and hide from the reality. Joe emphasizes that Larry did not fly the same model no. that he supplied components for, and keeps shouting "What's the matter with you!" to his son Chris, rather being honest. Later, he cites an excuse for his sin that it was only and all for Chris, which shows that he was still not ready to accept his greediness for the better status in the society. ...read more.

It can be understood that he finally accepted his guilt and compromised his life for that. However, we have to think whether his suicide was justifiable. Personally, I feel that he only escaped from the pressure that he was getting, and he was afraid to face possible consequences that people, Chris, and the whole world will neglect him. Even if he confessed in the court and was condemned to death, the mean of each death is different, since suicide is an action of escape but death penalty is a form of punishment. If I were him, I would have paid back the debts to the society in a form of donation or voluntary work in silence, rather hiding and escaping. So, what do you conclude Joe Keller as: A selfish opportunist, or a caring family man? My opinion as Joe Keller a selfish opportunist, I strongly argue that killing people for money must not happen anywhere in the world. Because every human's life has more value than papers printed called "money", and one's greediness over the money should be controlled by his rationality. ...read more.