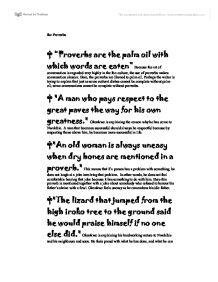 Ibo Proverbs � "Proverbs are the palm oil with which words are eaten" Because the art of conversation is regarded very highly in the Ibo culture, the use of proverbs makes conversation classier. Here, the proverbs are likened to palm-oil. Perhaps the writer is trying to explain that just as some cultural dishes cannot be complete without palm-oil; some conversations cannot be complete without proverbs. � "A man who pays respect to the great paves the way for his own greatness." Okonkwo is explaining the reason why he has come to Nwakibie. A man that becomes successful should always be respectful because by respecting those above him, he becomes more successful in life. �"An old woman is always uneasy when dry bones are mentioned in a proverb." ...read more.

� "Let the kite perch and let the eagle perch too - If one says no to the other, let his wing break." " �"Living fire begets cold, impotent ash." Okonkwo's analysis of the conversion of his "degenerate and effeminate" son, Nwoye. �"As a man danced, so the drums were beaten for him." Rev. Smith's intransigence and hostility towards anything traditional. �"Whenever you see a toad jumping in broad daylight, then you know that something is after its life." �"Eneke the bird was asked why he was always on the wing and he replied: "Men have learned to shoot without missing their mark and I have learned to fly without perching on a twig." "You can tell a ripe corn by its look" � "It is more difficult and more bitter if a man fails alone" � "A proud heart can survive a general failure, because such a failure does not prick its pride" ...read more.