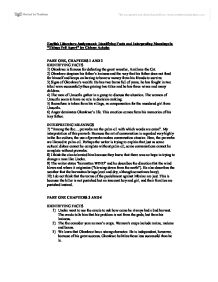 English Literature Assignment: Identifying Facts and Interpreting Meanings in "Things Fall Apart" by Chinua Achebe PART ONE, CHAPTERS 1 AND 2 IDENTIFYING FACTS 1) Okonkwo is famous for defeating the great wrestler, Amilinze the Cat. 2) Okonkwo despises his father's laziness and the way that his father does not fend for himself and keeps on having to borrow money from his friends to survive. 3) Signs of Okonkwo's wealth: He has two barns full of yams, he has fought in two tribal wars successfully thus gaining two titles and he has three wives and many children. 4) The men of Umuofia gather in a group to discuss the situation. The women of Umuofia seem to have no role in decision-making. 5) Ikemefuna is taken from his village, as compensation for the murdered girl from Umuofia. 6) Anger dominates Okonkwo's life. This emotion comes from his memories of his lazy father. INTERPRETING MEANINGS 7) "Among the Ibo... proverbs are the palm-oil with which words are eaten". My interpretation of this proverb: Because the art of conversation is regarded very highly in the Ibo culture, the use of proverbs makes conversation classier. ...read more.

6) When Obiageli broke the pot I would have expected Okonkwo to be furious and violent towards her. Instead, he acknowledged that she had broken her pot and said nothing further about it. By this time in the book, the reader has, already, a generalised idea about Okonkwo and the type of person that he is and how he reacts. Perhaps Achebe made Okonkwo's reaction unusual to add to the excitement of the book, and to eliminate predictability. 7) Okonkwo's feelings towards the game at this point are that of excitement. He probably reflects on the days of his own victory and relives that feeling of triumph. PART ONE CHAPTERS 7 AND 8 IDENTIFYING FACTS 1) A group of men take Ikemefuna deep into the forest and attack him with hatchets, Okonkwo stabs him further with his matchet, and kills him. Ikemefuna is killed because the Oracle of the Hills and the Caves have pronounced it. 2) Okonkwo is the one that finishes off the murder by stabbing Ikemefuna with his matchet. 3) Okonkwo adores Ezinma because she looks as beautiful as Ekwefi, but wishes that she were a boy because of her strong and decisive character. ...read more.

Okonkwo goes out in search of herbs to make a medicine to help cure Ezinma when she is sick. However, he does not help in consoling Ekwefi and making her calm down, he carries on shouting and giving orders. Okonkwo perhaps feels scared of situations like these and he acts out of anger. 7) In my opinion the people know what is behind the "egwugwu" masks. Evidence for this is found in the first chapter of page 65 when the writer describes that they might have noticed the springy step of the second egwugwu and who was missing, but if they did notice something they kept it to themselves. 8) I do not think the decision was fair. This is because problems cannot be solved with material gifts, and also because it is hard to change an abusive husband into a non- abusive one in a short period of time and to rely solely on a promise that he will not beat his wife. 9) In my opinion the goal is not achieved because in order to settle a dispute, they have to figure out who is in the wrong and penalize them for their actions. PART ONE CHAPTER 11 IDENTIFYING FACTS 1) Ekwefi tells a folktale about a tortoise. 2) Chielo announces that Agbala wanted to see his daughter, Ezinma. She takes Ezinma to her sacred cave. ...read more.