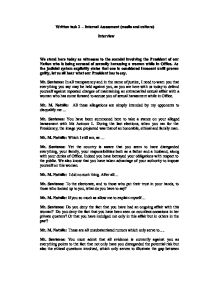 Written task 2 - Internal Assessment (media and culture) Interview We stand here today as witnesses to the scandal involving the President of our Nation who is being accused of sexually harassing a woman while in Office. As the judicial system explicitly states that one is considered innocent until proven guilty, let us all hear what our President has to say. Mr. Sentence: In all transparency and in the name of justice, I need to warn you that everything you say may be held against you, as you are here with us today to defend yourself against repeated charges of maintaining an extramarital sexual affair with a woman who has come forward to accuse you of sexual harassment while in Office. Mr. M. Notnilc: All these allegations are simply intended by my opponents to disqualify me ... Mr. ...read more.

Mr. Sentence: To the electorate, and to those who put their trust in your hands, to those who looked up to you, what do you have to say? Mr. M. Notnilc: If you so much as allow me to explain myself... Mr. Sentence: Do you deny the fact that you have had an ongoing affair with this woman? Do you deny the fact that you have been seen on countless occasions in her private quarters? Or that you have indulged not only in this affair but in others in the past? Mr. M. Notnilc: These are all unsubstantiated rumors which only serve to.... Mr. Sentence: You must admit that all evidence is currently against you as everything points to the fact that not only have you disregarded the potential risk but also the ethical questions involved, which only serves ...read more.

How do you plead before the entire nation that is watching and judging? Mr. M. Notnilc: In all clear conscience, ... Mr. Sentence: I must warn you that a series of highly incriminating tapes has come into our hands and that we will shortly be viewing. Mr. M. Notnilc: I would wholeheartedly welcome any... Mr. Sentence: The very least you could do would be to apologize to the country for your misconduct ... Mr. M. Notnilc: ... (silence) Mr. Sentence: ...but from what I can see you are determined to hold on to deny your obvious misconduct. We have unfortunately run out of time for today. Mr President, thank you for accepting our invitation to join us in this news bulletin. It has been most enlightening. Once again, unbiased journalism has ensured freedom of expression. Ladies and Gentlemen, thank you for being with us tonight. Have a pleasant evening. ...read more.