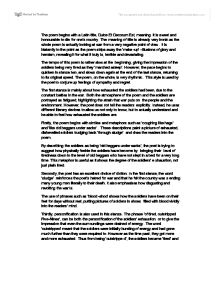 The poem begins with a Latin title, Dulce Et Decorum Est, meaning it is sweet and honourable to die for one's country. The meaning of title is already very ironic as the whole poem is actually looking at war from a very negative point of view. It is blatantly to the point as the poem strips away the 'make-up' -illusions of glory and heroism, revealing it for what it truly is, terrible and devastating. The tempo of this poem is rather slow at the beginning, giving the impression of the soldiers being very tired as they 'marched asleep'. However, the pace begins to quicken in stanza two, and slows down again at the end of the last stanza, returning to its original speed. The poem, on the whole, is very rhythmic. This style is used by the poet to conjure up feelings of sympathy and regret. The first stanza is mainly about how exhausted the soldiers had been, due to the constant battles in the war. Both the atmosphere of the poem and the soldiers are portrayed as fatigued, highlighting the strain that war puts on the people and the environment. However, the poet does not tell the readers explicitly. ...read more.

The phrase 'ecstasy of fumbling' is juxtaposition. This is because ecstasy usually suggests heightened happiness whereas fumbling is more of a mistake. This literary device is used to emphasise the state of confusion the soldiers are in. Fourthly, colour imagery such as 'thick green light', 'green sea', is used. The metaphor 'green sea' is also used to describe the gas surrounding the soldiers. This helps to contribute to the readers' visualisation of the gas attack. Instead of just describing it as 'light' or 'sea', the poet adds colour to his description, giving a much clearer picture of the situation. Fifthly, the poet' choice of words is also important. The words, imagery and metaphors used in the last two lines pull the readers into a dream-like situation, or more specifically into the previous nightmares the poet had had of his soldiers dying in front of him. For example, the word 'drowning' provides a vivid image of a person dying. It gives the readers a sense of helplessness and put the readers in the shoes of the dying soldier. These lines help to give way to the third stanza. In the whole poem, each stanza is made up of at least 6 lines. ...read more.

Finally, the poet uses a caesura again, 'The old lie: Ducle et decorum est/Pro patria mori'. This time it is to 'attack' this saying which was commonly used to encourage young men to join the war. The poet shows his disagreement with this saying, believing that there is neither nobility nor honour in war and that the poet's purpose of writing this poem is for those who did not go to war to see the reality and misery of the war. Through vivid imagery and compelling metaphors, the poem stirs up the exact feelings that the poet wanted. The use of exact diction and vivid figurative language add further emphasis on his point, that war is truly devastating and horrible. He also uses imagery which gives a horrifying impression especially in the way how war has dehumanised them. The theme of dehumanisation is being repeatedly emphasised in the poem as it is present in almost every stanza, conveying the idea that war has taken humanity away from the soldiers. The literary devices used, makes this poem extremely effective as an anti-war poem as it stirs up sympathy for the soldiers, forcing the readers to pity and evaluate war horrors, which is absolutely horrid and revolting. ...read more.