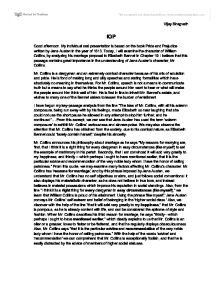 IOP Good afternoon. My individual oral presentation is based on the book Pride and Prejudice written by Jane Austen in the year of 1813. Today, I will examine the character of William Collins, by analyzing his marriage proposal to Elizabeth Bennet in Chapter 19. I believe that this passage contains great importance in the understanding of Jane Austen's character, Mr. Collins. Mr. Collins is a clergyman and an extremely comical character because of his mix of adulation and pride. He is fond of making long and silly speeches and stating formalities which have absolutely no meaning in themselves. For Mr. Collins, speech is not a means to communicate truth but a means to say what he thinks the people around him want to hear or what will make the people around him think well of him. He is first in line to inherit Mr. Bennet's estate, and wishes to marry one of the Bennet sisters to lessen the burden of entailment. I have begun my key-passage analysis from the line "The idea of Mr. Collins, with all his solemn composure, being run away with by his feelings, made Elizabeth so near laughing that she could not use the short pause he allowed in any attempt to stop him further, and he continued:"... From this excerpt, we can see that Jane Austen has used the term 'solemn composure' to exhibit Mr. ...read more.

From the line, "that I do not reckon the notice and kindness of Lady Catherine de Bourgh as among the least of the advantages in my power to offer," Jane Austen imposes that Mr. Collins believes that he makes strong and thought-provoking statements, although he doesn't understand that these formalities are considered humorous to the external civilization. He also mentions "your wit and vivacity I think must be acceptable to her," and with the usage of the words 'wit' and 'vivacity,' we witness Mr. Collins attempting to flatter Jane Elizabeth, to strengthen the influence of his marriage proposal. From the line "must be acceptable to her," we learn that Collins can be considered a disciple of Lady Catherine de Bourgh, as his actions are only to please her. He also says, "my views were directed to Longbourn instead of my own neighborhood, where I assure you there are many amiable young women." Through this phrase, we understand that Mr. Collins is implying that he may easily find a wife in another neighborhood, and it is not necessary that he must marry Elizabeth Bennet. He is trying to show his importance in his neighborhood, which again is displaying his pompous character. Later, Mr. Collins says "But the fact is, that being, as I am, to inherit this estate after the death of your honored father (who, however, may live many years longer), I could not satisfy myself without resolving to choose a wife from ...read more.

One of the literary features I highly appreciate of Jane Austen is her ability to convey her images of her characters not by simply stating her descriptions of them, but instead displaying her characters by their diction, language, and actions. In this case, Jane Austen doesn't directly describe Mr. Collins, but shows us the image of Mr. Collins in the society's perspective, and by his long and silly speeches. Jane Austen's vivid vocabulary efficiently assists in the portrayal of her characters. To conclude, I would like to say that Mr. Collins' proposal and his reaction to Elizabeth's refusal solidify Jane Austen's portrait of this absurd character. The proposal itself is delivered in such a way that it seems more appropriate for a business deal than for a declaration of love. I think Mr. Collins is an example of someone who sees marriage more as a partnership for social and financial advantage than as a relationship to express the love and affection of two people for each other. Only after he explains these cold considerations does he mention that he has a high regard for Elizabeth. It becomes clear that his wife will be merely an ornament in the "respectable" life he's creating for himself. I believe that Mr. Collins is an extremely society-dependent man, and lives to make others feel highly of him. Not only with the upper-class, but Collins believes in creating a good impact on everyone. But, I think that his extreme level of adulation and pride will lead him to a down-fall. ?? ?? ?? ?? Vijay Bhagvath ...read more.