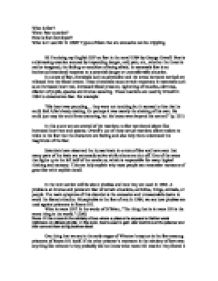 What is fear? Worst Fear question? How is fear developed? What is it used for in 1984? Types of fears that are excessive can be crippling. Hi I'm doing my English IOP on fear in the novel 1984 by George Orwell. Fear is a distressing emotion aroused by impending danger, evil, pain, etc., whether the threat is real or imagined; the feeling or condition of being afraid. In mammals fear is an instinctual emotional response to a potential danger or uncomfortable situation. In a state of fear, chemicals such as adrenaline and the stress hormone cortisol are released into the blood stream. These chemicals cause certain responses in mammals such as an increased heart rate, increased blood pressure, tightening of muscles, alertness, dilation of pupils, spasms and intense sweating. These reactions are used by Orwell in 1984 to demonstrate fear. For example: "His heart was pounding... they were not touching but it seemed to him that he could feel Julia's body shaking. Or perhaps it was merely the shaking of his own. He could just stop his teeth from chattering, but his knees were beyond his control." (p. 231) ...read more.

The black darkness is thicker than molasses. I haven't been able to see for the longest time. As a scrape my body along against the cold gagged floor of this never ending tunnel I realise the tunnel was getting skinner. I realised ages ago that turning around wasn't an option. The tunnel narrows and I squeeze my shoulders through a skinny segment and then I'm stuck. The tunnel was holding me like a lobster clamps it prey. With my heightened hearing I hear a faint gurgling sound. There is water rising. The lapping of the water crescendos and I feel its frigidness licking my fingers. After crawling up my arms, it begins to lap at my face. Within moments I covers my mouth and I prepare to take my last breath. I begin to trash around but I can't I'm tied down. My breath runs out. Use of cold imagery and description. Are your classmates more likely to understand your fear or most frightening moment if you simply state it or if you describe using adjectives and imagery? Do you think that George Orwell and most other authors take this fact into consideration when they write? ...read more.

What does the party use fear for? Mass Control. The party uses fear to control and imprison citizens. Have you all heard of Jeremy Bentham's panopticon? A panopticon is a prison system arranged so that an observer or guard can observe any prisoner at any time with out the prisoner knowing. The fear of being watched and being caught keeps the prisoners in check. This prison system has been implemented all around the world in both rich and poor countries. In 1984, the party has a giant panopticon by using telescreens. "So long as he remained within the field of vision which the metal plaque commanded, he could be seen as well as heard. There was of course no way of knowing whether you were being watched at any given moment... you had to live- did live, form habit that became instinct-in the assumption that every sound you made was overheard and, except in darkness, every movement scrutinized." (Orwell 5) With this quote, we can see that the fear of being caught by the thought police caused by telescreens causes all the citizens to obey the law. It is almost like a prison. You may ask why are the citizens afraid to get caught. There are two reason, the first is the punishment which has been described above and the second is the fear of the thought police. ...read more.