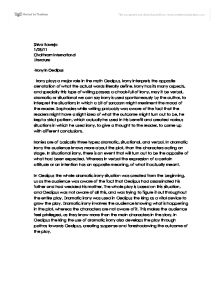 Shiva Baweja 1/28/11 Choithram International Literature -Irony in Oedipus Irony plays a major role in the myth Oedipus. Irony interprets the opposite denotation of what the actual words literally define. Irony has its many aspects, and specially this type of writing possess a chock-full of irony, may it be verbal, dramatic or situational we can say irony is used spontaneously by the author, to interpret the situations in which a bit of sarcasm might merriment the mood of the reader. Sophocles while writing probably was aware of the fact that the readers might have a slight idea of what the outcome might turn out to be, he kept a strict pattern, which actually he used in his benefit and created various situations in which he used irony, to give a thought to the reader, to come up with different conclusions. ...read more.

Whereas in verbal the expression of a certain attitude or an intention has an opposite meaning, of what it actually meant. In Oedipus the whole dramatic irony situation was created from the beginning, us as the audience was aware of the fact that Oedipus had assassinated his father and had wedded his mother. The whole play is based on this situation, and Oedipus was not aware of all this, and was trying to figure it out throughout the entire play. Dramatic irony was used in Oedipus the king as a vital device to grow the play. Dramatic irony involves the audience knowing what is happening in the plot, whereas the characters are not aware of it. ...read more.

Some of the examples are, when he ran away from his parents because he thought he would end up killing his father? Because he left, he actually ran towards his real parents. Another situation would be Oedipus promises to get rid of whoever killed King Laius; however, he was the one who unknowingly did it. He also curses whoever killed the king, and wishes them a miserable and painful life. This meant that he jinxed himself. Irony has its significance in every writing. In Oedipus, the significance was that the whole play was based on an irony; about how Oedipus was not sure of whom he has killed and who he has married. This situation led out to more miniscule events which again contained irony, and the Greek tragedy turned out to be glorious. ...read more.