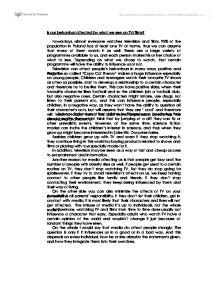 Is our behaviour affected by what we see on TV/films

Is our behaviour affected by what we see on TV/films? Nowadays, almost everyone watches television and films. 90% of the population in Poland has at least one TV at home, thus we can assume that many of them watch it as well. There are a large variety of programmes available to us, and each person makes his or her choice of what to see. Depending on what we chose to watch, that certain programme will have the ability to influence us or not. Television can affect people's behaviours in many ways, positive and negative. Firstly the so-called "Copy Cat Theory" makes a huge influence especially on young people. Children and teenagers watch their favourite TV shows as often as possible, start to develop a relationship to a certain character and therefore try to be like them. ...read more.

This can have unpleasant affects on the developing character. Science fiction can affect children in different ways, by altering their view of reality. They might think that by jumping of a cliff they can fly or other unrealistic events. However, at the same time, science fiction movies can incite the children's interest in science, and thus when they grow up might become interested in Scientific Documentaries. Besides children grow up with TV and even if they stop watching it, they continue living in this world by buying products related to shows and films or playing with toys specially made for it. In addition, television may be seen as a way of fast and cheap access to entertainment and information. ...read more.

On the other side you can also minimize the affects of TV on your personality. Actually it is all parents' responsibility. If they don't let their children, get in contact with media, it is most likely that their characters and lives will not get affected. The misuse of media it's up to individuals, not the whole society. Furthermore, watching TV and films from time to time does usually not influence a character that easy. Especially adults who watch TV have a certain opinion of the world and wouldn't change it just because of random things they have seen. On the whole I would say that media do affect people strongly. The question is only if it influences us in a good or in a bad way. And this depends on every individual, how he or she absorbs the statements given, and how they integrate them into their own lives. ...read more.