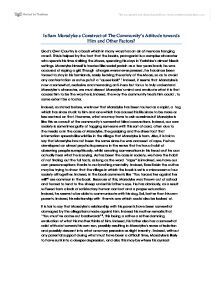 Is Sam Marsdyke a Construct of The Communitys Attitude towards Him and Other Factors?

Is Sam Marsdyke a Construct of The Community's Attitude towards Him and Other Factors? God's Own Country is a book which in many ways has an air of menace hanging over it. This is helped by the fact that the books, protagonist is a complex character who spends his time stalking the Moors, spending his days in Yorkshire's almost bleak settings. Marsdyke himself is treated like social pariah as a few years back; he was accused of raping a girl. Though charges were never pressed, he has since been forced to stay in his farmlands, rarely leaving the safety of the Moors, so as to avoid any confrontation or as he puts it a "queer look"i. Indeed, it seems that Marsdyke is now a somewhat, reclusive and menacing anti-hero but for us to truly understand Marsdyke's character, we must dissect Marsdyke's mind and evaluate what it is that causes him to be the way he is. Indeed, the way the community treats him could, to some extent be a factor. Indeed, as stated before, we know that Marsdyke has been touted as a rapist, a tag which has since stuck to him and one which has caused his life since to be more or less centred on that. However, what we may have to ask ourselves is if Marsdyke is like this as a result of the community's somewhat blind accusations. ...read more.

Another factor which may shape Marsdyke's character is his interaction with women since the rape accusation. Though we have already talked about his relationship with his mother, there is also the relationship with Jo, a girl who has recently moved to the Moors and formed an alliance with him. Initially, Marsdyke allows his cynicism to get the better of him and we witness him making conversations in his head due to his preconceptions which are in many respects justifiable since her family and her are "townies". Indeed, his interaction with women may be tinged with a sense with misogyny due to the fact that it is the fact that essentially, it is a girl who has more or less changed his life forever. Indeed, if we look at the way Marsdyke, talks about the girl, he always refers to her as "the girl" or by her pronoun. This could be a result of an underlying contempt for the female race, resulting in a wish to not reach such intimate levels such as calling a woman that isn't his mother by her name. However, it becomes clear that Jo herself is a bit of a rebel herself and is feeling somewhat isolated herself, due to her family's decision to relocate to a place like the Moors. It is with this shared feeling that they are able to form a bond and soon we notice the fact that this is having a positive effect on Marsdyke. ...read more.

With the chicken incident however, we see that he may be trying to change his ways, with the compassionate act of burying the chicken's dead body. However, though we may see that as him not wanting to be seen as a cold-blooded killer as he is already a pariah, could this also be him trying to compensate for some past actions? Indeed, if he has nothing to hide, wouldn't the normal thing to have done would be not so surreptitious in the concealment of what he has done. Indeed, Marsdyke is a complex character and for now, one will not be able to fully decipher what goes on in the mind of Marsdyke. What one can be sure of is the fact that there is more to Marsdyke then meets the eye. His character is simply too unreliable and too odd to simply dismiss as a result if in him being accused of rape, albeit a rather serious accusation. However, to answer the question put forward, I believe the answer to this is a partial, yes. There is no denying the fact that even if there is an underlying insanity to Marsdyke's character, the village's treatment of him has caused his insanity to increase more and more over time and therefore, things could potentially reach a chilling and somewhat sinister climax. i Chapter 17, page 120 ii Chapter 3, page 18 iii Chapter 16, page 117 iv Chapter 16, page 117 ?? ?? ?? ?? ...read more.