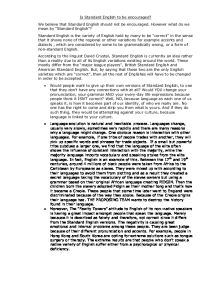 Is Standard English to be encouraged?

One obvious reason is interaction with other languages. For example, if one tribe of people trades with another, they will pick up specific words and phrases for trade objects. If a small but powerful tribe subdues a larger one, we find that the language of the elite often shows the influence of constant interaction with the majority, while the majority language imports vocabulary and speaking styles from the elite language. In fact, English is an example of this. Between the 17th and 19th centuries, around 4 millions of black people were taken from Africa to the Caribbean by Europeans as slaves. They were mixed up with according to their languages to avoid them from plotting and as a result they created a secret language taking the vocabulary of the slaves owners but using a grammar based on their original African language creating PIDGIN. ...read more.

The extreme results are that people who don't speak a native variety of English suffer either from a psychological or physical deficiency. * Furthermore, (American and British Englishes) Standard English is spoken by a very small number of people. According to the 2000 census made in the US and to the 2001 census made in England about 330 million people speak Standard English and there are around 65 varieties of Englishes, so why to oblige a bigger number of people change or adapt their language to a smaller variety of English that only few people speak? Accent1: Accent is the way a person speaks, with differences in the sounds that can show the place a person comes from, or their social class. Dialect2: Specific vocabulary, syntax (or sentence structure) and grammar of one particular variety of English, including the way its speakers pronounce it. ...read more.