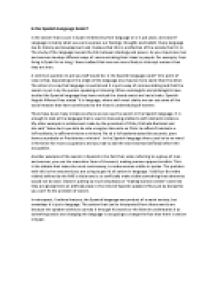 Is the Spanish Language Sexist?

﻿Is the Spanish Language Sexist? Is the sexism that occurs in Spain inhibited by their language or is it just plain, old sexism? Language is mainly what we use to express our feelings, thoughts and beliefs. Every language has its history and development and I believe that this is a reflection of the society that it?s in. The study of the language reveals the link between ideology and power. As you may know men and women develop different ways of communicating their ideas to people. For example, from living in Spain for so long, I have realized that men are more likely to interrupt women than they are men. ...read more.

Spanish linguist Alfonso Oroz stated “it is language, where with most clarity we can see some of the social reasons that have contributed to the historic undervaluing of women. There have been many instances where we can see the sexism in the Spanish language. It is enough to look at the language that is used in discussing problems with domestic violence. My other example is a statement made by the president of Chile, Michelle Bachelet and she said “debo decir que ésta ha sido una gran discusión en Chile: la señora Presidente o la Presidenta, la señora ministro o ministra. No sé si la Academia estará de acuerdo, pero hemos acordado en Presidenta y ministra”. ...read more.

Visibilizar (to make visible) defined by the RAE?s dictionary is: to artificially make visible something that otherwise would not be seen. Doesn?t putting so much emphasis on ?making women visible? seem like they are giving them an artificial place in the mind of Spanish speakers? But just by doing this you can?t fix the problem of sexism. In retrospect, I believe that yes, the Spanish language was product of a sexist society, but nowadays it is just a language. The sexism that can be interpreted from those words are because the speaker wishes to convey it through his words or the listener understands it as something sexist and changing the language is not going to change the fact that there is sexism in Spain. ...read more.