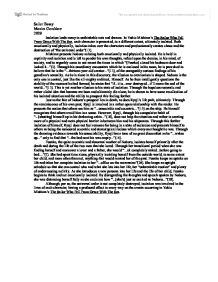 Isolation in The Sailor Who Fell From Grace With The Sea

Isolation leads many to unthinkable acts and dreams. In Yukio Mishima's The Sailor Who Fell From Grace With The Sea, each character is presented, to a different extent, ultimately isolated. Both emotionally and physically, isolation takes over the characters and predominantly creates chaos and the destruction of "the universal order"(13). Mishima presents Noboru as being both emotionally and physically isolated. He is held in captivity and isolation and is left to ponder his own thoughts, reflect upon the demise, in his mind, of society, and to arguably come to not resent the times in which "[Fusako] closed his bedroom door and locked it..."(3). ...read more.

Through the reminiscence of his own past, Ryuji is involved in a rather open relationship with the reader. He presents the notion that others see him as "...unsociable and eccentric..."(15) on the ship. He himself recognizes that others avoid him in a sense. However, Ryuji, through his compulsive habit of "...[shutting] himself up in his darkening cabin..."(18), does not help the situation and rather is creating more of a physical and meta-physical barrier in between him and his shipmates. Through this further isolation of himself, Ryuji does not feel remorse for being in a state of seclusion and presents himself to others as being the rumoured eccentric and stereotypical recluse which everyone thought he was. ...read more.

Fusako keeps an uptake on life and takes her complete isolation to her "...office on the mezzanine"(26). She keeps an uptight schedule so that she can control who and what she lets into her life, her "unbreakable routine" and plenty of endeavouring activity. As she introduces a new persona into her life and the life of her child, Fusako begins to think and act emotionally isolated. By disregarding the thoughts and speech spoken by Noboru, she was distancing herself fully as she exclaims how "...[she's] just as excited as Noboru..."(28). Although, per se, the universal order is not completely destroyed, isolation was involved in the lives of each character, having a profound effect in every way on the events occurring in Yukio Mishima's The Sailor Who Fell From Grace With The Sea. ?? ?? ?? ?? Sailor Essay Maxim Gorshkov 2009 ...read more.