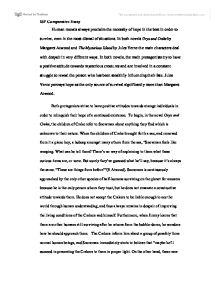 ISP Comparative Essay Human morals always proclaim the necessity of hope in the best in order to survive, even in the most dismal of situations. In both novels Oryx and Crake by Margaret Atwood and The Mysterious Island by Jules Verne the main characters deal with despair in very different ways. In both novels, the main protagonists try to have a positive attitude towards mysterious creatures and are involved in a constant struggle to reveal the person who has been stealthily influencing their fate. Jules Verne portrays hope as the only source of survival significantly more than Margaret Atwood. Both protagonists strive to have positive attitudes towards strange individuals in order to relinquish their hope of a continued existence. To begin, in the novel Oryx and Crake, the children of Crake refer to Snowman about anything they find which is unknown to their nature. When the children of Crake brought forth a sac, and removed from it a piano key, a hubcap amongst many others from the sea, "Snowman feels like weeping. What can he tell them? There's no way of explaining to them what these curious items are, or were. But surely they've guessed what he'll say, because it's always the same. "These are things from before""(9 Atwood). Snowman is continuously approached by the only other species of half-humans surviving on the planet for answers because he is the only person whom they trust, but he does not emanate a constructive attitude towards them. ...read more.

This optimism gives them renewed hope in creating a better place for themselves and the outcast. Snowman, in Oryx and Crake on the other hand, responds to a very similar situation when he comes to understand that there are other human beings with very little optimism, therefore decreasing his hope for a better future. All in all, Jules Verne uses optimism highly in his characters to increase hope, whilst Margaret Atwood doesn't allow the character much room for optimism leading Snowman to despair. In order to survive and resurrect their hope, both Jimmy and Cyrus Smith and his comrades attempt to discover who has influenced their lives secretly. Primarily, Jimmy finds that he is in need of something better, and in agony calls upon Oryx to help him, as though she was present. Whilst very lonely, Jimmy wonders how "He used to take good care of himself...Now...he's wasting away..."Say anything", he implores her. She can hear him, he needs to believe that, but she's giving him the silent treatment. "What can I do?" He asks her. "You know I ..."" (Atwood 14). Due to his loneliness, Snowman tries to make himself feel better by convincing himself that Oryx is still alive and listening to him. Snowman believes in her presence and her control over him, because he doubts the fact that Crake and her had put together this future beforehand. Although he loves her to an extent, his recognition of her power over him shows how he believes that she is part of the mystery behind what has happened to his life so far, therefore showing his lack of hope for the better. ...read more.

Cyrus Smith knows and is aware that there is someone out there helping them secretly, and wants to know who he is, because if this person can help them with so much, he could help them find their way home. And Cyrus Smith is convinced this person exists, therefore he is extremely hopeful of one day escaping from Lincoln Island. On the other hand Snowman in Oryx and Crake feels an enormous amount of guilt for not having picked up all the clues from both Oryx and Crake. This regret ultimately leads to his lack of hope, as Snowman is only searching into his past. It can thus be concluded that both the castaways in The Mysterious Island and Snowman in Oryx and Crake are in both in search for the reasons of their present status, and through different ways look for the person who is responsible for all these actions. Jules Verne signifies the importance of hope much more than Margaret Atwood, in order to survive. In both novels, the protagonists try to attain this hope by trying to uncover who is liable for who they are at present, and by having an optimistic stance towards strange creatures. Both novels Oryx and Crake by Margaret Atwood and The Mysterious Island by Jules Verne represent hope as a necessary element for survival. In conclusion, for a human being to survive in the direst of circumstances, hope is the only factor which can inspire one on to succeed. ...read more.