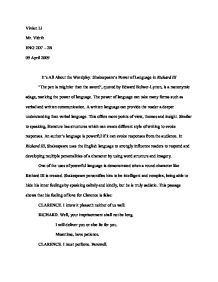 It(TM)s All About the Wordplay: Shakespeare(TM)s Power of Language in Richard III

Vivien Li Mr. Vidrih ENG 2D7 - 2B 09 April 2009 It's All About the Wordplay: Shakespeare's Power of Language in Richard III "The pen is mightier than the sword", quoted by Edward Bulwer-Lytton, is a metonymic adage, marking the power of language. The power of language can take many forms such as verbal and written communication. A written language can provide the reader a deeper understanding than verbal language. This offers more points of view, themes and insight. Similar to speaking, literature has structures which can create different style of writing to evoke responses. An author's language is powerful if it can evoke responses from the audience. In Richard III, Shakespeare uses the English language to strongly influence readers to respond and developing multiple personalities of a character by using word structure and imagery. One of the uses of powerful language is demonstrated when a round-character like Richard III is created. Shakespeare personifies him to be intelligent and complex, being able to hide his inner feelings by speaking calmly and kindly, but he is truly sadistic. ...read more.

The language of the play is expressive with wordplay and creates the rhythm of iambic pentameter, making one feel connected with the literature. Imagery is the use of emotional words which conjure up vivid scenes, intensifying the play. Richard III is rich in imagery, using metaphors, "The royal tree hath left us royal fruit" (III. vii.166) and similes, "like the formal Vice, Iniquity" (III. iii.82). The words, images, and moods indicate the further events of the story. Shakespeare uses tactful words through Lady Margaret to curse Richard III, which are fulfilled later on in the play. Prophecies made about Richmond were woven into the play, adding complications to the plot, and foreshadowing Richard's future, "I do remember me, Henry the Sixth/ Did prophesy that Richmond should be king . . . / Because a bard of Ireland told me once / I should not live long after I saw Richmond" (IV. ii. 96-97,107-108). The added complications in the plot can change a character's feelings and thoughts, creating a different atmosphere and theme in the play. ...read more.

ii.126-129). She melts into his deceiving words and agrees to marry him. Also, the power of language plays into how tactful Richard is. He then persuades the mayor with his wordplay to believe that Hastings was a traitor, "So smooth he daubed his vice with show of virtue / That, his apparent open guilt omitted- / I mean his conversation with Shore's wife- / He lived from all attainder of suspects" (III. iv.29-32). Shakespeare affects the power of language by showing persuasion, which evokes feelings from characters and readers, resulting in the effect of the power of language. Language is ultimately very powerful. It is used every day; from reading, to speaking, to writing. Shakespeare's writing skilfully presents the use of the power of language, specifically in Richard III. His creation of round-characters and the structure of his message engage and influence the audience emotionally, and intellectually. A strong influence can make one understand and agree, which may lead to a response or action. Action, which is also important, is the implication of the use of language. Therefore, action and language are often responsive to one another and both the key to communication. ...read more.