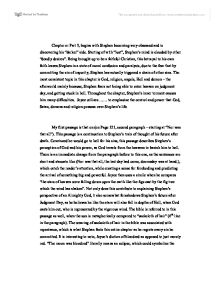 James Joyce uses many literary motifs to illustrate and emphasize the progress of Stephens religious journey in this novel.

Chapter or Part 3, begins with Stephen becoming very obsessed and is discovering his "darker" side. Starting of with "lust", Stephen's mind is clouded by other "deadly desires". Being brought up to be a faithful Christian, this betrayal to his own faith leaves Stephen in a state of moral confusion and paralysis, due to the fear that by committing the sin of impurity, Stephen has actually triggered a chain of other sins. The most consistent topic in this chapter is God, religion, angels, Hell and demon - the afterworld mainly because, Stephen fears not being able to enter heaven on judgment day, and getting stuck in hell. Throughout the chapter, Stephen's inner torment causes him many difficulties. ...read more.

Joyce then uses a simile when he compares "the stars of heaven were falling down upon the earth like the figs cast by the fig tree which the wind has shaken". Not only does this contribute to explaining Stephen's perspective of an Almighty God, it also somewhat foreshadows Stephen's future after Judgment Day, as he believes he like the stars will also fall in depths of Hell, when God casts him out, who is represented by the vigorous wind. The bible is referred to in this passage as well, when the sun is metaphorically compared to "sackcloth of hair" (6th line in the paragraph). The wearing of sackcloth of hair in the bible was associated with repentance, which is what Stephan feels this entire chapter as he regrets every sin he committed. ...read more.

This contrast is a direct representation of the difference between Stephen and the angels - the difference between their eternal life of purities and his conflicted mind of sins and regrets. To conclude, James Joyce uses many literary motifs to illustrate and emphasize the progress of Stephen's religious journey in this novel. Stephen's path to self - discovery to recovery (for this particular chapter) is heavily influenced by his religious beliefs and upbringing. In addition Joyce employs symbolism, imagery and motifs in this chapter to bring a sense of reality to Stephen's thoughts and adventures. Stephen's change, while being complicated and difficult is well worth the painful experience of confessions, cleansing and starting anew. ...read more.