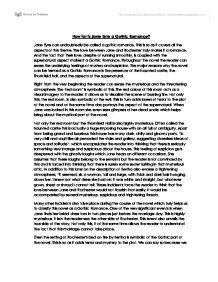 Jane Eyre as a gothic romance

How far is Jane Eyre a Gothic Romance? Jane Eyre can undoubtedly be called a gothic romance. This is so as it covers all the aspects of this theme. The love between Jane and Rochester truly makes it a romance. And the fact that their love, despite of running smoothly, is coupled with the supernatural aspect makes it a Gothic Romance. Throughout the novel the reader can sense the underlying feelings of mystery and suspicion. The major reasons why the novel can be termed as a Gothic Romance is the presence of the haunted castle, the Thornfield hall, and the aspects of the supernatural. Right from the very beginning the reader can sense the mysterious and the threatening atmosphere. The 'red room' is symbolic of this. The red colour of this room acts as a visual imagery to the reader. It allows us to visualize the scene of burning fire. ...read more.

She assumes that these laughs belong to the servants but the reader is not convinced by this and is forced into thinking that there is surely some secret lurking in that mysterious attic. In addition to this later on the description of Bertha also evokes a frightening atmosphere, "It seemed, sir, a woman, tall and large, with thick and dark hair hanging down her. I knew not what dress she had on: it was white and straight, but whatever gown, sheet or shroud I cannot tell. These incidents force the reader to think that the love between Jane and Rochester would not flourish that easily. It would be accompanied by several mysterious, suspicious and frightening threats. Many other incidents also take place during the course of the novel which truly helps us to classify this novel as a Gothic Romance. One of the very significant events is when Jane finds her bridal dress torn in two pieces just before the marriage day. ...read more.

This incident suggests that the love between Jane and Rochester would not find its happy conclusion so easily. It will have to surpass many obstacles in order to reach its destination. This is further a feature of a Gothic novel. Both these incidents are related to fire and so remind the reader of the red room (in which Jane was locked during her childhood) as even that used to produce a burning sensation. thus adding a sense of danger, fear and terror. Thus to conclude the novel can undoubtedly be called a Gothic Romance. This is so as it is shown that the love between Jane and Rochester is accompanied by the supernatural aspect. Their love does not run smoothly and further has to overcome several hindrances and obstacles in order to have a happy conclusion. It is only because of the fact that that the writer, Charlotte Bronte, creates a frightening and a mystical atmosphere throughout that she has actually been able to write such a novel, full of intrigue and suspicion. ...read more.