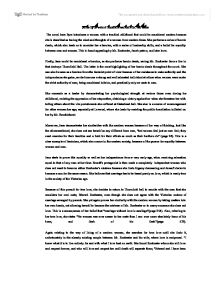 Jane Eyre was a modern woman for her time

Jane Eyre was a modern woman for her time The novel Jane Eyre introduces a woman with a troubled childhood that could be considered modern because she is described as having the mind and thoughts of a woman from modern times. She performs a series of heroic deeds, which also leads us to consider her a heroine, with a series of leadership skills, and a belief for equality between men and women. This is found appealing by Mr. Rochester, Jane's patron, and later lover. Firstly, Jane could be considered a heroine, as she performs heroic deeds, saving Mr. Rochester from a fire in that destroys Thornfield Hall. The latter is the most highlighting of her heroic deeds throughout the novel. She can also be seen as a heroine from the feminist point of view because of her resistance to male authority and the independence she gains, as she becomes a strong and well educated individual at a time when women were under the strict authority of men, being considered inferior, and practically only servants to men. ...read more.

She yet again proves her similarity with the modern woman by taking matters into her own hands, not allowing herself to become the mistress of Mr. Rochester or to marry someone she does not love. This is a consequence of her belief that "marriage without love is sacrilege"(page 354). Also, referring to her true love, she states "No woman was ever nearer to her mate than I am: ever more absolutely bone of his bone, and flesh of his flesh"(page 523). Again relating to the way of living of a modern woman, she searches for true love until she finds it, unfortunately in the already existing couple between Mr. Rochester and his wife, where love is reciprocal. "I know what it is to live entirely for and with what I love best on earth. She found Rochester whom she will love and respect forever, and who will love and respect her until death will separate them, "Edward and I have been married for ten years now and on our sixtieth anniversary we will still dance to all the songs we love" (Bronte 547). ...read more.

You know I was proud of my strength: but what is it now, when I must give it over to foreign guidance, as a child does its weakness? Of late, Jane - only - only of late - I began to see and acknowledge the hand of God in my doom. I began to experience remorse, repentance; the wish for reconcilement to my Maker. I began sometimes to pray: very brief prayers they were, but very sincere." (page 248) Finally, the return of Mr. Rochester's eyesight also means that whatever wisdom he gained with his blindness, disappears, and he goes back to feeling entitled to pleasure and happiness because of his position within the social classes. It also brings an end to his relationship with Jane. In conclusion, Jane's leadership, heroism and her similarities with the modern woman appeal very much to Mr. Rochester. This creates the possibility of true love forming between the two protagonists, the increased wisdom gained by Rochester because of blindness also contributing to this cause, which is later lost and culminates in the termination of the relationship. ?? ?? ?? ?? ...read more.