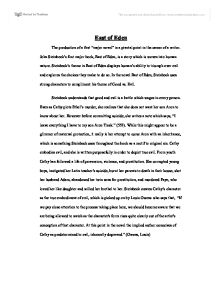 East of Eden The production of a first "major novel" is a pivotal point in the career of a writer. John Steinbeck's first major book, East of Eden, is a story which is woven into human nature. Steinbeck's theme in East of Eden displays human's ability to triumph over evil and explores the choices they make to do so. In the novel East of Eden, Steinbeck uses strong characters to compliment his theme of Good vs. Evil. Steinbeck understands that good and evil is a battle which wages in every person. Even as Cathy plots Ethel's murder, she realizes that she does not want her son Aron to know about her. However before committing suicide, she writes a note which says, "I leave everything I have to my son Aron Trask." (553). While this might appear to be a glimmer of maternal protection, it really is her attempt to curse Aron with an inheritance, which is something Steinbeck uses throughout the book as a motif to original sin. Cathy embodies evil, and she is written purposefully in order to depict true evil. From youth Cathy has followed a life of perversion, violence, and prostitution. ...read more.

(Owens, Louis) The narrator's own voice also introduces some of the observations that give authenticity to Steinbeck's exploration of the nature of good and evil. The narrator sometimes is used in function as someone who works "in direct variance with the action." (Lisca, Peter) This enables Steinbeck to convey multiple views on the conflict between good and evil. One observation is that the narrator thinks about the similarities and differences of "the church and the whorehouse, which arrived in the Far West simultaneously." (217). The narrator ironically relates the two, and he says that both accomplish "a different facet of the same thing, which is to take a man out of his bleakness for a time." (217). But Steinbeck doesn't view churches and whorehouses this simply. Steinbeck sees things in the church which reflect the battle between good and evil. The church has goodness, but it is flawed. Steinbeck is very aware about the destructive life which is led by whores, whose lives lack the relationships and continuity that the Hamilton women enjoy. An example of this is that Steinbeck uses the narrator's directions for madams, where he says that madams "have to keep suicide at an absolute minimum." ...read more.

And they have the power of choice. Steinbeck's belief in the human powers of choice can be seen in Adam's final words to Cal. He tells him this to assure him that his choices, not predetermination or his wicked mother will determine his destiny. Joseph Fontenrose agrees with this and he says that, "In the "thou mayest" doctrine, evil can be rejected and good chosen." (Fontenrose, Joseph) This is Steinbeck authenticating his own belief that human beings can overcome evil. Through the lives of his own characters, he defines the nature of good and evil. Closely related to the theme that "thou mayest rule over sin" is this thought that wants to figure out what goodness and evil is. Steinbeck creates several powerful characters in East of Eden, and most of them serve a purpose to accentuate his conflict between good and evil in the book. This struggle is a common one and is one of the oldest battles that people continue to fight everyday. He uses characters like Cathy Ames to portray absolute evil in the world, and Adam Trask to portray the naivety that often accompanies the belief in too much goodness. While Steinbeck believes that good will ultimately triumph over evil, he also believes that each person has the choice to reject evil for themselves. ...read more.