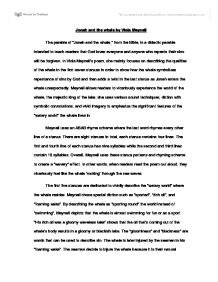 Jonah and the whale by Viola Meynell The parable of "Jonah and the whale," from the Bible, is a didactic parable intended to teach readers that God loves everyone and anyone who repents their sins will be forgiven. In Viola Meynell's poem, she mainly focuses on describing the qualities of the whale in the first seven stanzas in order to show how the whale symbolizes repentance of sins by God and then adds a twist in the last stanza as Jonah enters the whale unexpectedly. Meynell allows readers to vicariously experience the world of the whale, the majestic king of the lake; she uses various sound techniques, diction with symbolic connotations, and vivid imagery to emphasize the significant features of the "watery world" the whale lives in. Meynell uses an ABAB rhyme scheme where the last word rhymes every other line of a stanza. There are eight stanzas in total, each stanza contains four lines. The first and fourth line of each stanza has nine syllables while the second and third lines contain 10 syllables. Overall, Meynell uses these stanza patterns and rhyming scheme to create a "wavery" effect. In other words, when readers read the poem out aloud, they vicariously feel like the whale 'rocking' through the sea waves. ...read more.

The corroding iron can also symbolize Jonah because he is not willing to listen to God and therefore is sinning. The personification of the weapon "journeyed through his flesh" creates an interesting imagery in which the weapon is on a journey to 'find' the whale's source of 'life' which is its heart. Readers are relieved because the whale was not injured by the weapon. Meynell then continues to describe another weapon by describing the imagery of: "Another lance he wore/Outside him, pricking in a tender spot." A lance is a weapon with a metal arrow head. The image of the whale "wearing the lance" can be analogous to Jesus Christ wearing the crown of thorns. When the whale wears "the lance", it is like a humiliation. The third and sixth stanza juxtaposes the whale's personality as being ignorant with the fourth and fifth stanza when it is described as being omnipotent. In the third stanza, even as the whale was injured, it doesn't seem to feel the pain because his "parts" could not even send a stronger message to his brain, it was as it its nerve system was not working efficiently. ...read more.

"Ocean edge" and "brim" are words used to describe the surface of the ocean. So wherever the whale passes, the surface of the ocean will rise. "Sea-floor" and "garden" were words used to describe the sea bed. The "harvest ripe" on the sea bed can be described as the food for the whale. Finally the last two stanzas describe the time when Jonah enters the whale. "Half-hints of knowledge" burst upon the whale as if it was experiencing an epiphany. This epiphany was suggested by the poet as coming from God. Maybe God was trying to inform the whale that it has to swallow Jonah to help God teach Jonah a lesson. This was further proven when the whale has glimpses of the three components of the world: Time, space, and change. "Something greater than his might" suggests that a powerful deity has control of the whale's mind and Jonah. In the last stanza, the whale swallows Jonah and is hit with the "blinding Truth". In the Bible story, Jonah was in the belly of the whale for three days and three nights; during that time, he finally understands that he should do what God asked him to do and is grateful to God for saving him from drowning. ?? ?? ?? ?? ...read more.